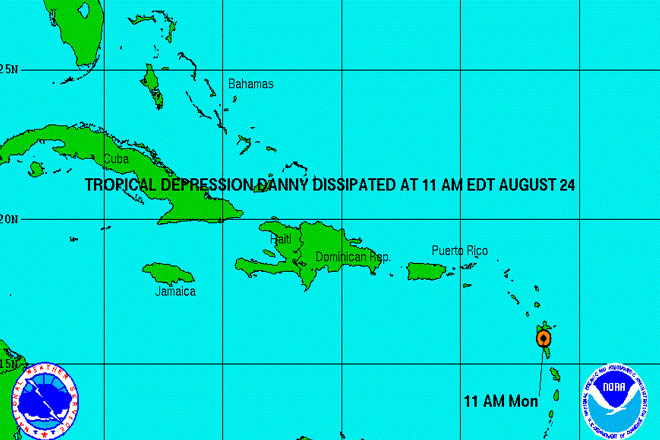 Danny No Longer a Threat to SKN

(ZIZ News) — A senior weather official says Tropical Storm Danny, which was downgraded to a Tropical Depression, no longer poses a significant threat to St. Kitts-Nevis and will be passing into the Caribbean Sea, south of St. Kitts.

Senior Meteorological Officer, Elmo Burke told ZIZ News that Danny has deteriorated but the Federation would still feel some effect of the storm.

“Tropical Storm Danny has disintegrated into a trough in the area of Guadeloupe and Dominica which is safely away from the Federation of St. Kitts and Nevis,” he said, adding that, “From it, we are anticipating just cloudy conditions and some passing showers. Some of the showers will be moderate at times. In some of these showers, we can see gusty conditions and also there is the possibility of some isolated thunderstorms in the vicinity.”

He said the office does not predict any significant winds from Danny but persons should be aware that there are other weather systems developing in the Atlantic.

“Persons can now relax as it pertains to Danny because Danny is moving away from the islands so we are under no threat at this moment. However, we are monitoring a tropical system, a disturbance that is out in the Atlantic that we are keeping an eye on and we will be updating the general public as time progresses,” he said.

He said in the meantime, seas are still choppy so sea bathers and fishermen should be very cautious.