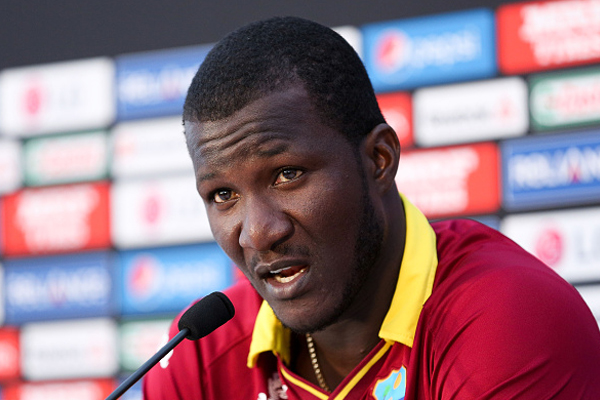 The highly-respected former captain made a career-best 89 to haul the West Indies out of trouble. He hit nine fours and four sixes to record the highest score by a number seven batsman in a Cricket World Cup match.

Sammy came to the crease with the West Indies tottering at 87 for five and added a record 154 for the sixth wicket with Lendl Simmons, who made 102 in late innings onslaught.

“In the heat of the moment I said something to admonish myself after playing what I felt was a loose shot. It was picked up by the stump mics and I want to apologize for that remark,” Sammy said.

I know there are a lot of people out, there watching the game and see us as heroes and ambassadors and it’s my duty to always be on top of our game. I especially apologize to the little children who watch the game and who are learning as they grow.”

The incident occurred during the 34th over and was picked up by stump microphones.

Sammy was charged by the International Cricket Council under its Code of Conduct for using “language or a gesture that is obscene, offensive or insulting during an International match”, and fined 30 per cent of his match fee.

Ireland seamer John Mooney was also slapped with a 30 per cent fine for swearing during the game.