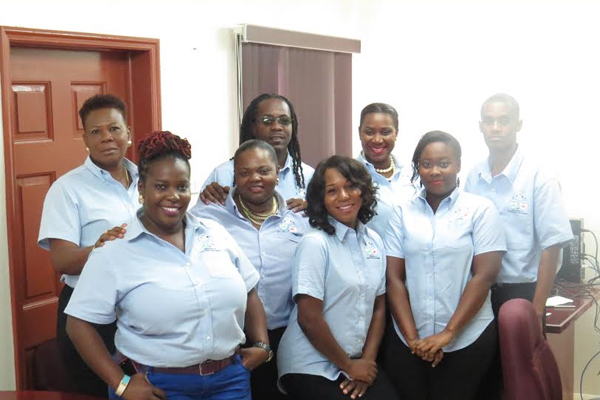 Basseterre St. Kitts — The Department of Constituency Empowerment (DCE) turns one year on November 8th. During the first operational year, the DCE has spearheaded and partnered in several projects and events with both private and public entities.

From its official launch last year, the Department has since hit the ground running and has created a name for itself.

Director for the Department, Dr Joyelle Clarke says from the onset, she was sceptical about the DCE fulfilling its mandate.

“I remember feeling a bit overwhelmed and wondering if all that we’re envisioning for the Department can manifest in such a short time. I remember complaining to the Director of Marine Resources and questioned if we can do it, and if the Department can function as it ought, and if people are ready for Constituency Empowerment; He admitted that it takes time but it will work. This is the same type of work that and positivity that we got from every single Director from inside the Ministry of Agriculture, as well as support from various Ministries including Office of the Prime Minister and Community and Social Development and this is the energy we used for the past year to ensure that our projects would be successful, our partnerships would be meaningful, and the communities would actually respond to the Department.

“I am very pleased with the growth of the DCE in terms of the partnerships that have been forged not only with other Ministries but with the private sector in delivering some of our programs to the country at large.”

Similarly, Ian Chapman, Acting Director of the Department of Agriculture was quoted as saying, “The DCE has grown tremendously over the one year it has been in existence and [it] has done so [much] to empower the citizens here in St Kitts.”

Immediately following the November 2013 launch, the Department spent the remainder of the year working on budget proposals in order to determine how it would move forward to ensure meaningful impact was felt throughout each constituency in the upcoming operational year.

The Department brought on its first set of workers, its Constituency Officers, in January and engaged them in seven weeks of extensive training in every area including Fisheries Management, Disaster Preparedness, SIDF projects, Development Bank and National Bank and the Ministry of Sports.

“I felt really proud that the officers came out every single day and took in the information and really devoted themselves to understanding how every other department functions and relates to the community,” said Director Clarke, “their role basically is working with the constituencies. They understood that even though they knew or had some sort of idea of how to relate to people, they needed to learn from every perspective and every Ministry and institution that was already working with constituents.”

Adding to that, the Department’s Director said part of that achievement began with sponsoring several community groups, “We set out to sponsor about five Model Community Groups (MCG) to the tune of approximately $250,000 and within a year we’ve actually gone beyond that by about 70% and we’ve sponsored more than ten groups branching from community-based initiatives, sporting groups, farming and health awareness campaigns. So, I’m very proud that the Department, with such a green staff and new to government and its operations, we’re doing quite well for ourselves and it’s something to be proud of.”

“Naturally,” Dr Clarke said, “It was our first year in operation and we wanted to ensure that we followed all the recommendations given to us by the respective Ministries and Departments who worked with community groups. So it was important for us to not just sponsor groups arbitrarily but develop a sort of model, best practice for how we would work with community groups in the future. We wanted to ensure in the DCE we have a faster, more transparent approach which ensured that community projects were sponsored and there was obvious partnership between the government, the representative and the community groups. And these five groups were chosen as an MCG because in the process of being sponsored they agreed to document every step of the year they would spend with us.

The Department was officially launched on November 8, 2013 with a mandate to encourage constituents to lean towards a self-help delivery system guided by three principles: community activism where community groups are enabled to develop projects that will influence community development; sustainable and resilient livelihoods that uses an approach of utilising natural resources, usually agriculture- and environment-based, to ensure the protection of village livelihoods; and participatory local governance that speaks to the fashioning of community councils that will enable constituents to contribute to policy and governance decisions through a standard national mechanism.