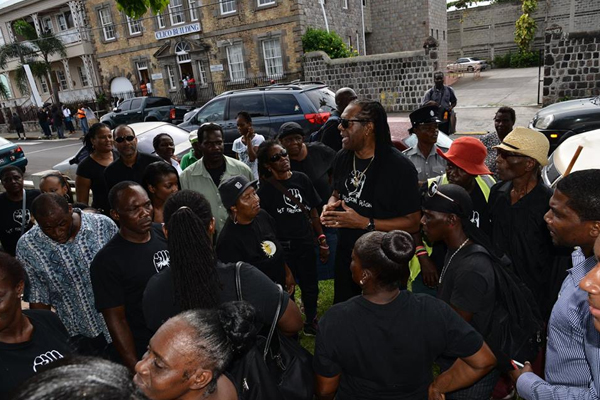 (ZIZ News) — Dozens of supporters gathered outside the courthouse on Thursday morning to find out what the court had to say about a defamation case brought against Freedom FM.

The court adjourned the case until March 2015.

According to Sylvester Anthony, the Attorney for the Defendants, the Plaintiffs, led by Hon. Dr. Timothy Harris, have filed two defamation lawsuits.

Anthony said the Plaintiffs, led by the Hon. Dr Timothy Harris, did not file documents to serve all of the defendants so Thursday’s proceedings could not go forward.

General Manager of Freedom FM Clement “Juni” Liburd said democracy is under threat and Freedom FM will not stand for it.

“Freedom FM is being taken to court, not as an originating party, but as someone who carried a message. So the messenger is being persecuted and we feel we have to send a message to Dr. Harris and the other people who are dragging us off to court that we will not have this. We will not tolerate the situation. Freedom is under threat. Today it’s Freedom FM, tomorrow it’s another radio station. So we are just simply saying ‘Let Freedom Ring, ‘” Liburd said.

Thursday’s session was the first appearance before the court and although the judge is giving the plaintiff’s an opportunity to file the necessary documents, he has suggested mediation as the way forward for all parties involved.