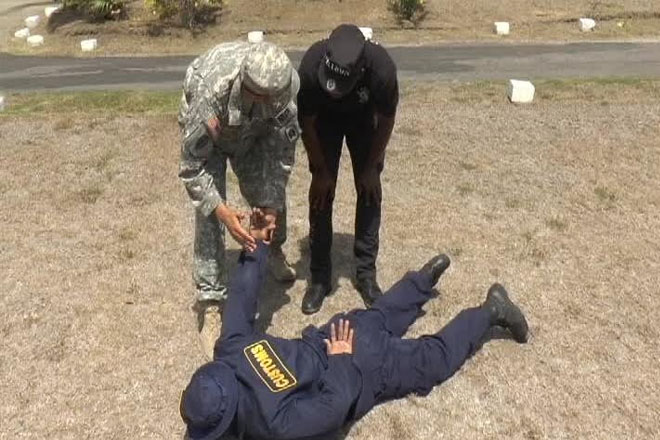 Defence Force and US Military Exchange

(ZIZ News) — For the next two weeks, the St. Kitts-Nevis Defence Force Camp will be the home for a Military Exchange Training exercise with the Florida Army National Guard.

The Florida Military Police Unit has teamed up with local law enforcement agencies: Her Majesty’s Prison, the Police Force, Customs and Excise Department and the Defence Force.

Captain Kayode Sutton, Public Affairs Officer in the St. Kitts-Nevis Defence Force, said the exchange is geared towards capacity development as they all engage in tactical movements and procedures in detainee handling and corrections.

“It’s developing new tactics, enhancing old tactics and new ways that have been tested and proven. Pretty much like the best practices that our partners from the north are bringing to us,” he said.

Lieutenant Alexander Ham, Operations Officer in the 806 Military Police Company said the exchange on their end, is a part of the Florida State Partnership Programme.

Lieutenant Ham said his officers want to observe the operations of the local Defence Force and share some of their experiences with the locals.

“We’re bringing a mixture of classroom and practical applications. We wanted to get a firm base of how we operate and then we can use practical exercises to reinforce those items that we’ve taught as well as what we’ve learned from the Defence Force. We also have a lot of experience on our civilian side through corrections and law enforcement,” he said.

The exchange involved learning how to properly detain prisoners or problematic subjects, how to handle persons in cells who are harming themselves or others, and controlling and diffusing escalating situations.

The participants shared their thoughts on the exchange so far.

Desroy Elliot, Corporal of the St. Kitts-Nevis Defence Force said “I sometimes go out as patrol commander where I have to face some of the elements on the street. The training that we’re going through is some searches and some detaining. Up to last night I went out and got to implement some of the stuff I learned.”

Jackie Adams, Basic Grade Officer at Her Majesty’s Prison said “I find it a little harder because those inmates not easy and as a woman I can show them what I have. What I learn so far is a lot of physical work.”

The Defence Force has had several exchanges with the Florida National Guard and the U.S. military in general.