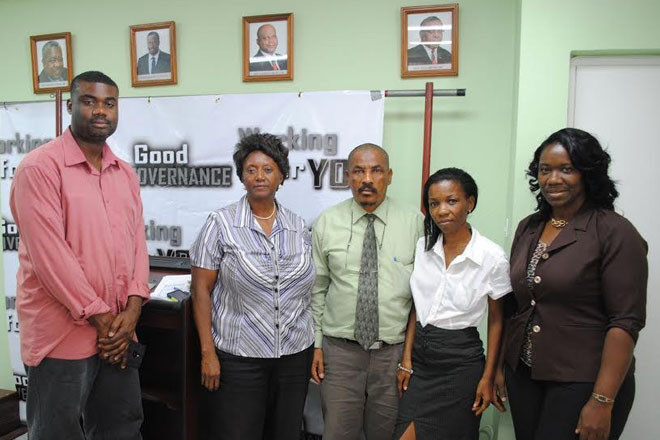 Basseterre, St. Kitts (July 21, 2015) — At a meeting held to familiarise himself with the workings of the People Employment Programme (PEP) as the Government seeks to streamline its operations, Permanent Secretary in the Office of the Prime Minister Mr Osbert DeSuza learnt that PEP facilitators have been working without job contracts.

Meeting for the first time with the PEP facilitators on Monday July 20 at the Parliamentary Lounge in the Government Headquarters, Mr DeSuza who has responsibility for the PEP expressed concern as to how persons would have been engaged for lengthy periods without job contracts, and offered to remedy the situation.

“Nobody here has a contract so if you were to go home you have no recourse,” explained Mr DeSuza. “I think we need to try and put something in place. If it were done properly from the beginning we won’t have been in this mess. But we still need to put something in place in relation to these contracts.”

The Permanent Secretary explained that it was open knowledge on what was going on with the PEP which lacked organisation, direction and exhibited a rampant wastage of government money a situation where the programme was basically eating up the resources of the SIDF.

He reminded them of concerns by Prime Minister, the Hon Dr Timothy Harris, during his Press Conference held last week Wednesday on how money would have been spent on PEP’s steering committee members. He added that $144,000 was spent on four cell phones and three landlines since the PEP started and to remedy that, the phones had been blocked.

“We have to do this thing differently and we all have to make sure that we do not continue the waste of the money so that the PEP can be sustained,” stated Mr DeSuza. “There are too many people on the PEP as far as I am concerned to just stop the PEP, and if we continue without keeping expenditure in check a lot of the people would have to go home and it is going to become a serious political and economic issue.”

Facilitators were further advised that it was time to have the PEP students certified, and Mr DeSuza said he did not understand why TVET was not part of the PEP training as what was happening at the PEP was akin to reinventing the wheel. He advised that all government training should be done through the National Skills Training Programme (NSTP).

“The whole idea is that when you spend three, four, six months on the PEP you must come off the PEP with some kind of certification and not just a certification of attendance,” said Mr DeSuza. “If they could not come off by getting a job, they come off by starting their own place of operation. The Development Bank will be willing to lend some start-up capital to persons who would be interested in going into their own businesses.

“We are having discussions with the TVET Council because I think going forward the TVET Council has to be the unit with the National Skills Training Programme that guide the programme and I think it is very important that we move the PEP along that direction so as time goes along people can be weaned off the PEP and we can bring in new persons on to train.”

In the meantime, People Employment Programme’s Assistant Director Mrs Janet Cable announced during the meeting that the PEP Training Coordinator Mrs Celia Christopher was leaving the programme, and that she was being replaced by Mr Orrett Grenyion who is a PEP facilitator in Entrepreneurship.

“Mr Grenyion comes with lots of experience and we believe that with his qualifications and experience he can help us to move the programme in the right direction,” stated Mrs Cable.

She advised the facilitators that she requires a status report, which would indicate to her where the students are now as it relates to whatever module they are working with.

“That will help Mr Grenyion because we cannot let the students leave with nothing, which we have to figure out exactly what we are going to do with the ones that we have now, if we can actually get them to CVQ level or if we have to come up with some sort of certification for them,” she said. “We need to know what they have done for the last two and a half years.”

Mr Orrett Grenyion while advising that the programme would have gone a step too far, he lamented that some of the facilitators were not prepared to assess the students because they have not been TVET trained.

“If we can get our facilitators to be trained as assessors, then it makes it much easier for us to assess our own trainees,” stated Mr Grenyion. “In order for you to become an assessor you have to have the proper qualifications. If you do not have the qualifications that they are asking for, then you can’t become an assessor. And as we reach that bridge we will outline exactly what it is that they are looking for.”