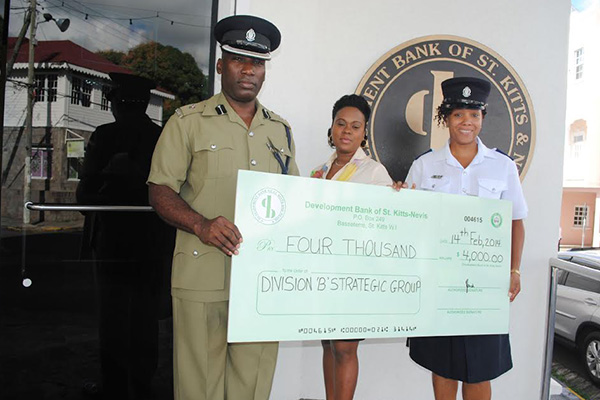 Development Bank and Police ‘bound by security and development’

Basseterre, St. Kitts — Commander of the St. Christopher Division ‘B’ of the Royal St. Christopher and Nevis Police Force, Superintendent Cromwell Henry, has said that there is a linkage between the force’s work and the development of the country.

He made the remarks on Friday February 14 at the offices of the Development Bank of St. Kitts and Nevis in Basseterre, when he received a donation of $4,000.00 from the bank to sponsor an awards ceremony to be organised by the St. Christopher Division ‘B’ Strategic Planning Group.

“If the country is not secure, then you would not have development,” said Superintendent Henry. “Whatever development that there is would be destroyed by persons who are lawless, and so the police play a very important role in creating an environment that is suitable for development.

“Whatever investment the bank would have made within the country, the police are the ones who protect that investment and if it is destroyed then the bank loses, so I think we are inextricably bound by security and development.”

Superintendent Henry, who was accompanied by Treasurer of the St. Christopher Division ‘B’ Strategic Planning Group Sergeant Carlene Phipps, received the sponsorship cheque from the Bank’s Manager for Marketing and Product Development Ms Danienne Brin.

“We are grateful for all the services that you offer to the Federation which directly support its development and its people, and we are happy that you are recognising your officers.”

According to Superintendent Henry, the annual event is held for the purpose of recognising officers within the Division, who would have excelled by going beyond the call of duty in performing their functions and executing their responsibilities. The ceremony is into its fourth year.

An officer from each of the five policing districts in the Division will be nominated, and from those five one would be nominated for the award of Officer of the Year for the Division, during the ceremony to be held on Saturday the 15th of March at the Garvey’s Estate Great House, Boyd’s Village.

“It is a formal event where we invite senior government officials,” said Superintendent Henry. “As a matter of fact this year it is under the patronage of the Prime Minister, the Rt Hon Dr. Denzil Douglas, who is the Minister responsible for Security, and his residence is within the Division, so it is fitting to have him as the patron for the event.”

On thanking the Development Bank for sponsoring the awards ceremony and presenting the cheque on February 14, Treasurer Sergeant Carlene Phipps termed it a Valentine’s Day gift from the Development Bank of St. Kitts and Nevis to the St. Christopher Division ‘B’ Strategic Planning Group.