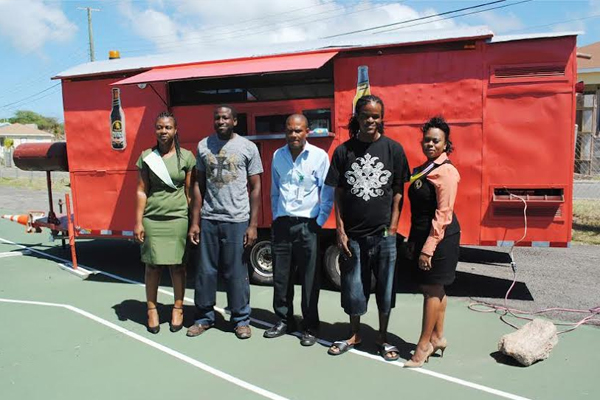 Charlestown, Nevis — Nevisian Keino Claxton had a grand plan for his catering business and all he needed was cash to actualise it, but he would hit brick walls when some of the banks he approached would promptly turn him down.

Mr Keino Claxton, 30, of Cherry Gardens in Nevis had been doing barbecue chicken out of his pickup truck and is well known at social events not only on Nevis but also on sister-island St. Kitts, and with a growing clientele he needed to offer better services.

He wanted a bigger and more comfortable working environment that would still give him the opportunity to move around to serve his clients at social events on the island and on St. Kitts as well, and out of his imaginative mind he made a design of a canteen on wheels.

“I normally do vending from my pick-up truck, so I decided I needed something I could be comfortable working in and in any environment so to speak,” explained Claxton. “I came up with a plan; I drew a little sketch and then I decided now I am going to be bigger, because what I had was a small scale.”

With the design ready he thought that bank managers would embrace it and run with it, but that was not be.

“To be honest the other banks they were giving me tough time,” said Claxton. “First I heard about this SIDF thing and someone told me to check. But then I decided to try the banks. I would say they turned me down because I carry my plans and everything, and they shut me down.”

Not one to be easily put down, Mr Claxton approached the Development Bank of St. Kitts and Nevis at their Nevis branch on the Island Main Road in Stoney Grove. He was somehow apprehensive as he had never done business with the bank, but he decided to take the bold step.

His fears were misplaced as he was received well at the Development Bank and found that the management was willing to listen to him, and as he says, the rest is history as he received the loan and was able to put his idea on wheels.

“When Mr Claxton approached the bank with his idea, I felt it was something the Development Bank of St. Kitts and Nevis could have done based on our mandate to assist small businesses,” said the bank’s manager for the Nevis Branch, Ms Hyacinth Pemberton.

“The idea was unique to Nevis and we wanted to be a part of this new business idea. It was an existing business and therefore the target market was identifiable and Mr Claxton’s invention which he had shown in fine details was going to be a boost to the business.”

The result is a caravan-looking mobile canteen on wheels that is 24 feet long and drawn by his pickup truck, attached as a trailer. The area inside the canteen is 15 feet by 7 feet and it is fully equipped with a deep freezer, stove for the fries and chicken, a fridge for drinks and a cooler.

“I have the washing area one for dishes and one for washing hands,” explained Mr Claxton as he showed the pride of his idea to Development Bank’s Manager for Human Resource, Marketing and Product Development, Ms Danienne Brin, who was visiting from St. Kitts.

“Basically everything is inside here and the grills are on the outside,” noted Mr Claxton. “There are tanks for cold water. I fill them up from the outside and there is a waste tank underneath this whole structure here that takes all the water. We also have a generator to the back of the mobile unit.”

Mr Claxton’s business is registered as Mr G Bar and Grill on Wheels, and other than areas where social activities are taking place, he goes to Pinney’s Beach on the weekends and is looking forward to take his canteen on wheels to St. Kitts most likely during the forthcoming Music Festival.

The entire outfit was built by his friend Michael Liburd of Fusion, a welding company based in Upper Government Road, Charlestown, who admitted that this is the first time that such an idea has come to fruition in Nevis. He pointed out that he would have seen similar ones in Trinidad and therefore did not find Mr Claxton idea as being outrageous or misplaced.

According to Ms Hyacinth Pemberton, for the Development Bank to have accommodated Mr Claxton, it also felt that the end result of his idea would enable the businessman to reach and attract more customers, and affordability was evident based on existing and project cash flow.

“Because the customer was able to give us an idea of his existing financials, it made the application process a smooth one,” said Ms Pemberton. “The Development Bank continues to encourage its business clients to keep records. Our Business Support Unit also assists in the training for preparation of financials.”