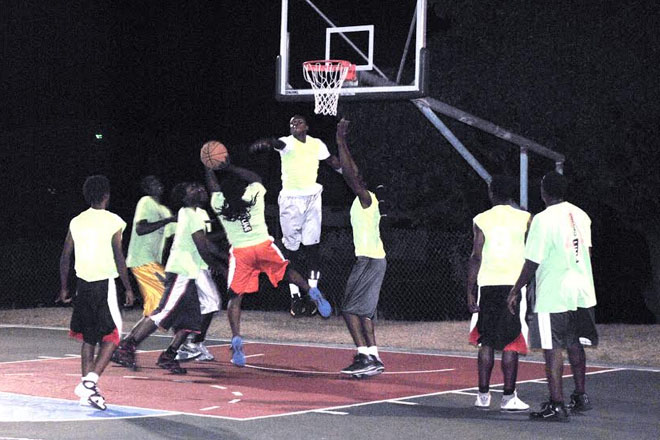 Basseterre, St. Kitts — At the end of the keenly contested league season in the on-going Development Bank Challengers Basketball League, Flawless Construction Lions’ unbeaten run ensured that they amassed maximum 24 points, in a scenario that saw five teams tie for the fourth position with 14 points each.

The Lions were in a devastating mood Thursday evening, April 2, when they finished their last league assignment in a game against Runners in which they won 86 to 60. In the early stages of the game it appeared as if Runners were destined for an upset when at one time they were both tied at 36 points.

That was not to be as Lion pulled away for the deserved win, where their Jouvette Leader scored 24 points, marshalling 6 assists and 3 steals. Backing him were the evergreen Delvin Marshall (20 points, 12 rebounds, 4 blocks), and Ansel Revan (12 points, 8 rebounds, 6 steals).

For Runners, who were hoping against hope for a win that would have automatically sent them into playoffs as the fourth seed, Joshua Morton who scored 13 points, also had 14 rebounds and three blocks. Others were Dion Edmeade (12 points, 5 rebounds), and Jared Clarke (12 points, 5 assist).

That Runners did not win, it might have presented a logistical nightmare for the Development Bank Challengers Basketball League organisers, as the team ended up with a total of 14 points from the eight games played (winning three and losing five), just as had Exodus Alliance, Hurricanes, Quakers, and Wolf Pack.

Flawless Construction Lions had emerged the top seed having won all their eight games, followed by Bad Boyz who lad only lost one game to Lions, and in the third position was Heights who had won five games and lost three, to amass a total of 18 points. The question was who was going to be picked the fourth seed after the memorable tie of 14 points by five teams.

“So as we thought, five teams ended with 14 points,” observed Development Bank Challengers Basketball Club Team Manager, Mr Roger Gumbs. “We went to the head to head match up and had to further use margin of victory to determine who would be the fourth seed.

“After much deliberation with our club officials, we are pleased to announce that Runners have earned the 4th and final seed.”

Playoffs will be played tonight (Tuesday April 7) at the Challengers basketball hard courts, with Bad Boyz facing Heights at 6:30 pm in the first game, while Flawless Construction Lions will meet Runners at 8:30 pm in the second game in what promises to be an exciting evening.

Nine teams entered the league which started on March 1 at the Challengers basketball hard court. Bad Boyz, whose only loss was to Lions ended up with 22 points, followed Heights who amassed a total of 18 points.

In what appeared to have been evenly contested games, five teams – Runners, Exodus Alliance, Hurricanes, Quakers, and Wolf Pack – each won three games and lost five games to end up with 14 points each. The last team, Exodus Juniors played five games, where they won one, lost four, but gave away three games as they were doing duty in the National SKABA Junior League.