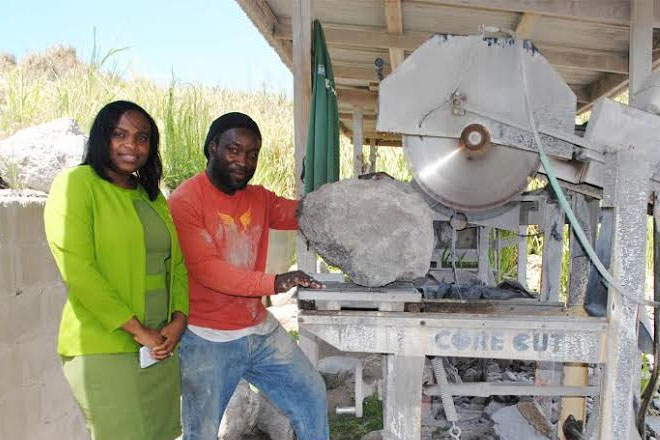 Development Bank is the source that sustains me, says Kittitian stonecutter

Basseterre, St. Kitts — Forty-year-old Steven Fleming knows that good life does not come easy. For a living he is today advancing the beauty of the Federation so as to boost its number one industry (tourism) the hard way.

“I am a stonecutter,” Mr Fleming, who is plying his trade at a popular high-end tourism spot, introduced himself. “And I also install stones.”

Nestled at 1,000 feet above the sea level on the slopes of Mount Liamuiga, and overlooking the historic villages of St. Paul’s and Dieppe Bay, is the Federation’s first five star hotel development the Kittitian Hill.

He is one of the about 50 contractors working at Kittitian Hill. But when Mr Fleming joined Kittitian Hill about two and a half years ago, he was not a contractor but an employee.

He prides himself as being a Kittitian who has transitioned from being an employee to an employer and is thanking Kittitian Hill which he describes as the quintessential equal opportunity employer for allowing him the opportunity to transition, and the Development Bank of St. Kitts and Nevis which made it happen.

Born and raised in Newton Ground, Mr Fleming went to the United States while still young. After 16 years he returned home and what he saw changed his outlook. He said: “After I saw all the development taking place here, I said I have been missing the action so let me see how I could be part of it. I saw the opportunity and I said I could take it.”

He got employed at Kittitian Hill as a stonecutter using machines owned by the company. The stones were being used to construct and decorate the buildings at the vast estate and also to build swimming pools.

Seeing the enormity of the work at hand, he felt that it would be more profitable if he were to buy his own stonecutting machines. They do not come cheap, and that is when he approached the Development Bank of St. Kitts and Nevis for financing and because of that bold step, he is the owner of three stonecutting machines at Kittitian Hill.

“I trained people and they ended up working for me,” pointed out Mr Fleming. “I have employed four people for that aspect of my work, and to install the stones I have five people working here with me. Those ones are paid by me and not by Kittitian Hill.

“I did not have any employee before I went to Development Bank because I was an employee myself. That I am a contactor now, I have taken nine people out of the streets and they are making a contribution to the social and economic development of their country in a meaningful way.”

The Federation offers more opportunities than people think, and Mr Fleming is advising young persons who have ideas to put them down on paper and approach the Development Bank of St. Kitts and Nevis which will not only help them develop their idea but will also provide the funding.

“I look at Development Bank of St. Kitts and Nevis as a business partner,” said Mr Fleming when he recently conducted an official of the bank on a tour of Kittitian Hill showing her what he has been doing. “For me it is like the source that sustains me because without them, I won’t be able to do what I wanted to do.

“Actually, I approached them with my idea and they believed in my idea. I approached them for finances to buy the three machines, after realising that I could get more by getting my own machines. This has worked well to the benefit of the country at large as I now employ nine persons.”

Development Bank’s Business Technical Officer, Ms Kimmoy O’Loughlin, explained that Mr Steven Fleming had seen all the other operations that were going on around the island, like people coming in and building condos, and he saw it as an opportunity to go and get his own machines.

She further noted that the Development Bank of St. Kitts and Nevis is always willing to partner with persons whose proposed project show viability and have the ability to create employment.

“With the growth of the tourism product, the bank was satisfied that Mr Fleming would succeed in his area of endeavour and offer job opportunities to others,” noted Ms O’Loughlin. “After he got the machines he employed four persons. At the beginning it was just cutting of the stones, but now he is installing and he has had to hire more people.

Ms O’Loughlin is of the opinion that with the sustained growth of the middle income market, the need for housing will grow as well and even when Mr Fleming’s work at Kittitian Hill will come to an end after the project is completed, there will still be demand for his services.