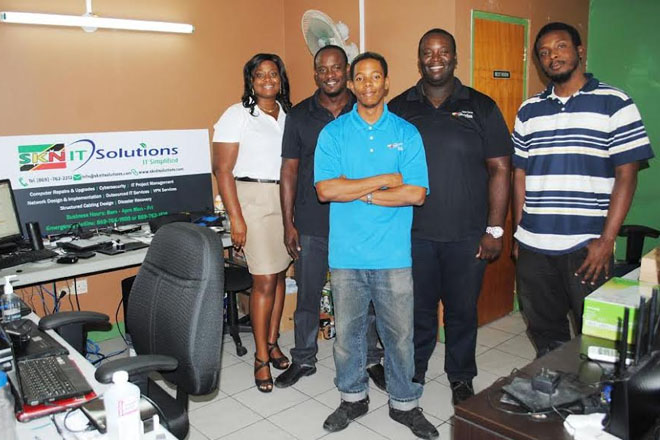 Development Bank saw our vision and not our ages, say young entrepreneurs

Basseterre, St. Kitts — Theirs reads like the perfect story of the unlimited resourcefulness exhibited by the youth of the Federation of St. Kitts and Nevis, and one which unfolds pleasantly when they are recognised for the potential they exude as opposed to their youthfulness.

Mr Tishon Thomas and Mr Winston Martin are two young Kittitians who were brought together by their love for things IT (Information Technology) and realised that apart from having similar interests in a world that revolves around technology for its survival, that they were also cousins.

Both in their very early thirties have been contributing to the economy of the Federation of St. Kitts and Nevis in a most meaningful way being co-owners of a rapidly growing company, SKN IT Solutions which so far has five persons in its employ – four fulltime and one on part-time basis.

According to Mr Thomas, the office is designed as a repair centre that is also a HP Certified Warranty Centre. They do computer clean-ups, computer building, computer repairs, and for businesses they do IT consulting, where they go on site and do project management, and help desk IT support for their employees, and while there they diagnose issues within their network or on their computers or on their servers.

They thank the Development Bank of St. Kitts and Nevis for assisting them to catch their vision when they needed some cash injection that enabled them to open the office on Church Street in Basseterre that has been servicing the country’s IT needs in a most professional manner.

Successful products of the Federation’s premier educational institute, the Clarence Fitzroy Bryant College (CFBC), the two would have caught the IT bug while still in college. Their hands-on idea of building the nation kicked off while at one of the leading companies in the Federation, S.L. Horsford, where they worked in its IT Department. Mr Thomas would have joined the company earlier and Mr Martin joined him later.

They left Horsford at different times. Leaving first was Mr Thomas who moved to Ross University and later Christophe Harbour. Mr Martin left Horsford for Royal Beach Casino where still works as the IT Manager, and while there Mr Thomas joined the Marriott and they became even closer.

It was while here that they cemented the idea that would make them realise that they could serve the country better in a position of independency. That would call for the setting up of a business that they would manage.

“I think my idea was to progress through the corporate world, to give me some validity, or to give us all the validity that we know what we are doing. So, once we climbed to the top of the corporate world and we reached the ceiling we decided in order to move further we have to move out and start on our own.”

When Mr Thomas decided that he was going to leave to set up the company, Mr Martin says that he saw it as an opportunity for his partner to venture out and be the daily manager of the business, and his promise to him was: “I will back you fulltime, one hundred per cent.”

Mr Thomas took the bold step and in November of 2013 after coming from vacation, he set up an IT business operating from his home. By February 2014 he was able to hire his first employee, but with the growth of the company, which they named SKN IT Solutions they opened an office on Church Street in July 2014.

As the company grew, they needed some capital to buy a second vehicle as he was using his personal car, and they would mostly have to rent a vehicle so as to get to their customers. They also needed to furnish the new office. They approached a number of commercial banks which turned them down because their business was less than two years old.

But when they went to the Development Bank of St. Kitts and Nevis, Mr Thomas notes that it looked at their financial records and business plans, and it was able to advance them a loan and with that they bought a car and furnished the office. They have a lodgement account at the bank which means that their business has grown without detrimental effect on their cash flow.

“The Development Bank saw our vision and not our ages or the age of the business,” said Mr Thomas. “The bank gives people chances where others don’t, and I think that is why it is very important to have a Development Bank to invest in your own people because capital is hard to come by mainly because regular banks just don’t take risk at all.”

Business Support Officer at the Development Bank of St. Kitts and Nevis, Ms Jasmin Primus, explained that the bank always looks at whatever opportunity that could be afforded to young persons to become entrepreneurs where they are able to serve the country and economy in a productive manner.

“The bank is always willing to provide assistance to any person who would make a difference in the Federation and the economy itself,” noted Ms Primus. “As it concerns SKN IT Solution Mr Thomas and Mr Martin came out as positive and a business minded individuals from the first time we met them.

“It is good to see when young persons are able to run things right in the Federation and even offer jobs to other young people. Long time when we heard of IT, people used to think somebody is coming from Canada or somewhere to deal with something, but now we have them right here in our Federation, which is an A+ for us and when we see persons with potential we capitalise on the opportunity to help them grow.”