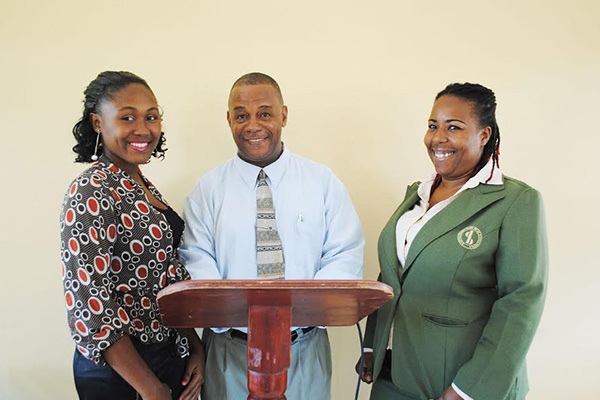 Charlestown, Nevis — Department of Agriculture in Nevis is for the second time in ten years using beauty pageant to promote agriculture on the island, and the Development Bank of St. Kitts and Nevis has come on board in support of food security in Nevis.

“This year the Department of Agriculture is celebrating its 20th anniversary of the Agriculture Open Day which will be hosted at the Villa in Charlestown on Thursday the 27thand Friday the 28th of March,” announced Mr Eric Evelyn, Permanent Secretary Ministry of Agriculture in the Nevis Island Administration.

“As part of the activities for our 20th anniversary this year, we will be hosting a Farm Queen Pageant and Calypso Show combined and that will be taking place on Saturdaythe 29th of March at the Cultural Complex in Charlestown.”

Mr Evelyn made the announcement on Monday February 17 at the conference room of the Ministry of Agriculture in Prospect where he revealed names of the five contestants for the Miss Farm Queen Pageant, and their respective sponsors.

“We have just a little over a month now for the contestants to prepare for what promises to be a fabulous show on the 29th of March,” said Mr Evelyn. “We are trusting that the show will be one of class, one that we would remember ten, twenty, thirty years down the line.

After the presentation of the sponsorship cheques to the contestants, Development Bank official Ms Avelyn Browne explained that the bank has a passion for agriculture and that it has worked with farmers on the island of Nevis to ensure that they are at the top of the game.

“Ms Vanessa Destouche is no stranger to pageants, having participated in the 2011 Charlestown Secondary School Pageant, and the Miss Culture Queen Pageant last year,” observed Ms Browne. “One of her favourite quotes is ‘the sky is the limit’ and we are confident that she will bring this crown to the Development Bank of St. Kitts and Nevis.”