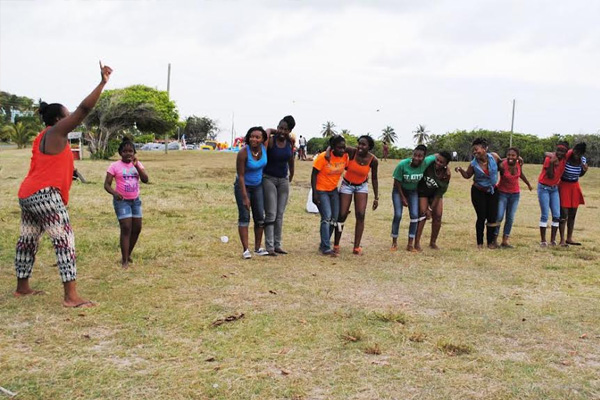 Basseterre, St. Kitts — Curtains came down spectacularly for Development Bank of St. Kitts and Nevis 33rd Anniversary celebrations with a fun day for staff, their families and friends, that was held on Saturday May 31 on the green pasture at Frigate Bay in Basseterre.

As Ms Danienne Brin, the bank’s Manager for Human Resource, Marketing and Product Development had predicted, it was a full-house event where staff members, their families and friends mingled with each other; there was plenty of food and drinks; there was music and there were games where they played real hard.

The members of staff including those from the Nevis branch office were divided into four houses; Green, Red, Orange, and Blue.

However missing was the tug of war which proved to be the highlight of the last fun day that was held in 2010. Present were a sprinkling of proud parents (of staff members), siblings and children of staff members, including at least three babies under age one.

Cricket was the game of choice having been played at various levels from as early as 11 am to as late as 7 pm, where a former national cricketer and presently the General Manager of the Bank Mr Lenworth Harris had a whale of a time. He also excelled at dominoes.

In the early stages a group of expatriates was using the same field to play baseball and as a result cricket was restricted to a ‘net’ session training with two crates of drinks acting as the wicket. It was quite an interesting exercise and most of the staff and their friends took part.

The Sasha Liburd team batted first and were all out for 39. Chasing 40 runs to win, the Ercelle Bernier team only lost two wickets and therefore convincingly won by five wickets. After the tournament, Mr David Fox was back on the field with a group of youngsters and they played until it was dark.

Football did not inspire those that were present, and ended up being an all female affair. With only one ball at hand, Security Officer, Ms Tishari Hobson had a great time with her daughter and a friend of her daughter as they dodged the boys who attempted to take the ball from them.

The next competitive game was the Mississippi that attracted a large section of women employees and their friends. It was indeed quite competitive and at one time left the energetic Ms Jasmin Primus flat on her back. It was Ms Natasha Sutton who reached the furthest stage to be adjudged the winner.

In dominoes the pair of Mr Lenworth Harris and Ms Ercelle Bernier licked the opposition hands down. They floored the teams of Mr Laurinston Matthew and Ms Tamara Herbert; Ms Roviane Taylor and Mr Patrice Ward; and Ms Kenisha Davis and Mr Robert Haynes (a guest).

Focus turned to the track with the first line-up in the lime and spoon competition with Ms Veronica Boddie as the starter. In the competition were Ms Zi Joseph (a guest), Ms Kristyl Bristol, Ms Laprisca Liburd, Ms Tiffany Saunders and Ms Jasmin Primus. Some arrived at the finish line without the lime. It was won by Ms Zi Joseph.

The second round of lime and spoon race had Ms Jamela Warner as the starter, and taking part were Ms Kimberly Phipps (a guest), Ms Veronica Boddie, Ms Roviane Taylor, Ms Ingrid Phipps, and Ms Laprisca Liburd. The winner was Ms Veronica Boddie.

The last event and the most hotly contested was a three stage relay that went for nearly a 100 meters stretch. In place of batons they used empty water bottles.

With neither judges nor a camera at the end of the race, the results of that race which came to an end at 6:30 pm still hang in the balance.