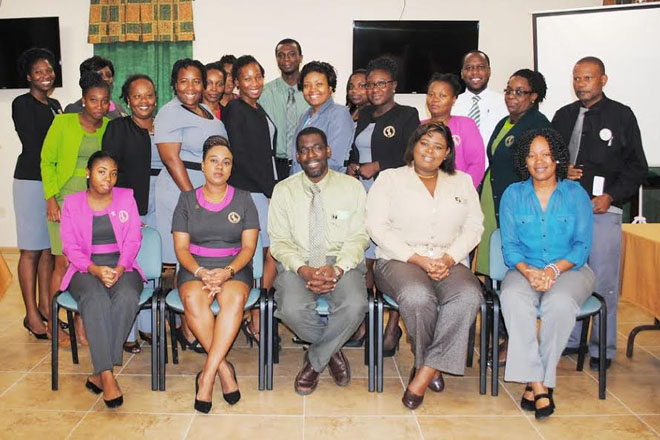 Development Bank staff urged to improve on productivity and effectiveness

Basseterre, St. Kitts — Staff at the Development Bank of St. Kitts and Nevis have been urged to ensure that the institution develops a positive organisational culture, which will only be possible if they improve on productivity and effectiveness as they serve the general public.

General Manager, Mr Lenworth Harris, made the remarks last week when he addressed 17 staff members drawn from the head office in Basseterre and the branch office in Nevis at the opening ceremony of a two-day workshop, ‘Developing a Positive Organisational Culture: Modelling Behaviours to Improve Productivity’.

“When we thought about what we wanted to do, the first thing was that we are in a new environment and we need to essentially make a new start, to give the bank an opportunity to expand, and also provide a set of opportunities to the persons who will be responsible to do so, which is yourselves,” said Mr Harris.

The workshop, which was facilitated by Ms Jannell Arthur of the Barbados-based Productivity Council, was held at the new Solid Waste Management Corporation’s conference room at Taylor’s.

Mr Harris told the workshop participants that when he walked through the doors of the Solid Waste building on his way to the conference room, he saw a sign which read, ‘Increase Productivity; Improve Efficiency; Institutionalise Efficiency’.

“Even in waste disposal, there must be productivity and there must be effectiveness, hence that is an example for us,” said Mr Harris. “It is developing a positive organisational culture that is the macro topic. The critical thing would be the ability of yourselves with assistance of our facilitator Ms Arthur, to model your behaviour such that the productivity that we crave would be forth coming.”

He advised that none of them were at the workshop by accident, explaining that they had been carefully selected adding that the institution had not discriminated against those who were not given that wonderful opportunity.

According to the General Manager all the staff could not be there, as the bank was still serving the general public. He opined that those at the workshop were selected because management believed that they basically represent the way forward for the institution.

He observed that there were new employees and hoped that the workshop would be a good introduction to them, and to some extent as part of their orientation programme. These are Mr Lockhart Alleyne, Business Technical Support Officer; Ms Loydene Bloice, Credit Risk Analyst; and Ms Necola Charles, Credit Risk Analyst.

“In order for you to guide the institution forward we need to empower you with as much wisdom and with as many tools that may be available to you so that you could put them to work in your day to day activities,” concluded Mr Harris.

“I want to wish you a productive, a memorable, an implementable, and a sustained knowledge-gathering exercise. Please remember you are here not as a punishment, but because we believe that you can provide the impetus to transform the institution.”

Workshop facilitator, Ms Jannell Arthur, said she has high hopes for them “and I know they will do well, and I know the bank will benefit from it.” For effectiveness, the Facilitator had put the workshop participants in four groups.

“The Productivity Council we are an organisation just over 20 years and we have been charged with a mandate of improving productivity in Barbados and the region,” said Ms Arthur.

“This programme I would have for the Development Bank of St. Kitts and Nevis is part of our overseas technical assistance programme, where we use our skills to develop processes and systems and doing training programmes for organisations who want to see their productivity take-off, and who want to improve the performance of their employees and the organisation as a whole.”

Delivering closing remarks was Mr Carlton Pogson, Development Bank’s Assistant General Manager, who told the workshop participants that part of the bank’s focus for 2015 Financial Year was to ensure that its staff was properly trained and equipped for the role ahead.

“We are competing against other institutions,” advised Mr Pogson. “No longer the focus is on transactional banking, but rather in relationship-built banking and if we are to achieve anything as a financial institution and make a positive impact in the communities we serve, we must start from within.”