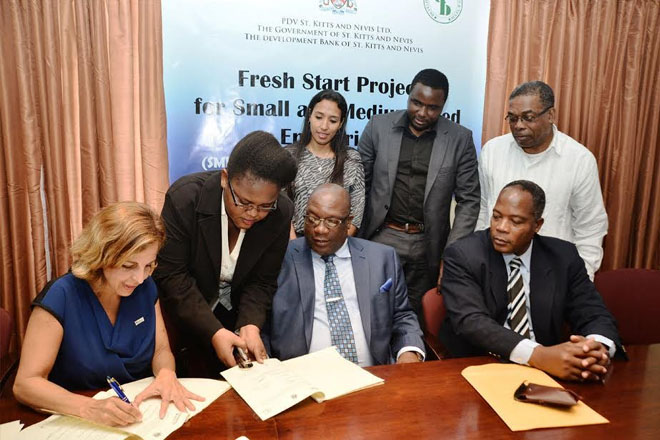 Basseterre, St. Kitts — Persons in the Federation operating or desirous to operate small to medium enterprises could as early as Monday September 7th apply for hassle-free loans of up to US$100,000 from the Development Bank of St. Kitts and Nevis.

This is with the signing of a loan agreement for US$5 million on Friday September 4th between the Government of St. Kitts and Nevis and the Bolivarian Republic of Venezuela through its PDV St. Kitts-Nevis Limited, thanks to Team Unity Administration leveraging the country’s foreign policy.

Making the announcement at the signing ceremony which was held at the boardroom of the Development Bank of St. Kitts and Nevis, Prime Minister and Minister of Finance the Hon Dr Timothy Harris said the amount has been placed at the Development Bank, which will disburse the loan amounts.

He thanked the leadership of the Development Bank for undertaking to partner with the government in providing an efficient mechanism for dealing with such a matter, which is in stark contrast to the arrangements in the past by the former government which established SEAF (Small Enterprise Assistance Fund) programme, which was executed through SKIPA.

“$11 million was squandered as part of a political effort to seek re-election,” lamented Dr Harris. “We are now attempting to secure those monies from those who the records would have shown had benefitted.”

The Prime Minister advised that public funds must always be used in a responsible way and the government is holding people to account, and it is going to investigate and ensure that as much of that money is secured, to come back so that there is a revolving fund at least for other people to be able to benefit.

“So I am happy that we found a realistic and proper mechanism,” stated the Prime Minister. “This fund will not be contaminated by preferences of the government. The Development Bank has been there through different administrations, providing loan support to people and it must continue as an important instrument for the delivery of financing, to do so in an objective way.

“I hope that the bank has arrangement in place so that by Monday (September 7th) when people shall begin to come, that there are forms etc. which people can access and the process can be initiated.”

According to the Prime Minister, this US$5 million project will be moving in phases initially US$2.5 million, with more to come as the programme is evaluated and the demand exists.

The target sectors shall include but not limited to the rural community shops, the supermarkets, the bars and restaurants; agricultural operations to include fisheries; taxi and commuter buses operators; small tools and equipment for the construction industry; trucking and earthmoving equipment; entertainment (videography and music); and barbers.

“I omitted one of the small businesses, and I see several representatives of that sector here,” said the Prime Minister, with a light touch. “I am sure that those who are involved in photography would benefit under that arrangement. We have our eyes on the ball.”

Development Bank’s General Manager, Mr Lenworth Harris, who was in the company of the acting Chairman of the bank’s board Mr Alexis Nisbett, and Board Member Ms Deniece Alleyne thanked the government on behalf of the institution for being a major part in making the Fresh Start initiative possible.

“The initiative as has been outlined is intended really to target small and medium size enterprises,” said the Bank’s General Manager. “The maximum loan as outlined here shall not be more than US$100,000, and the Interest rate shall be 5%.

“The repayment of the loan shall be – and remember it is a loan – expected and we will be ensuring that it is paid back so we can sustain the programme for time to come. The repayment will be based on the nature of the business that is being funded, and where the repayment can start almost immediately. It will be on a reducing balance basis whether monthly or weekly instalments, but as appropriate.”

He noted that they will have a reporting mechanism where the bank will be doing regular quarterly reports for the government and to PDV St. Kitts-Nevis Ltd. Audits of the programme shall be carried out, at any point in time if the government or PDV so desire, noting that they can engage the bank’s Internal Auditor.

“I would say we are ready of today (Friday) for the processing on applications, but let us say Monday (September 7th) to start the process,” said Mr Lenworth Harris. “The process will go through the normal banking scrutiny, but we will not create obstacles to qualifying candidates from accessing the funds.”

Ms Deniece Alleyne a director of the Development Bank, who is a lawyer by profession, embossed the bank’s seal on the loan agreement papers.