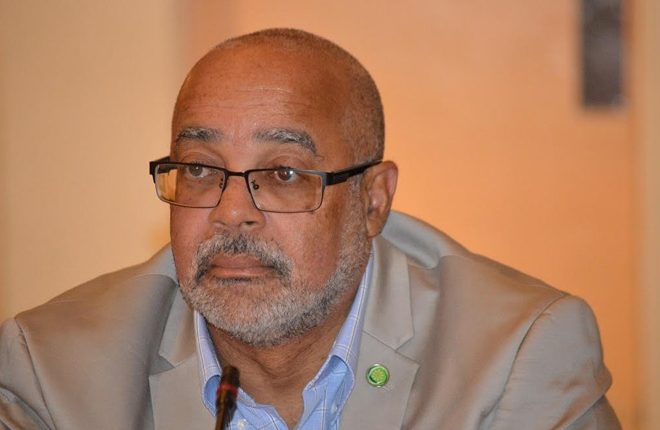 Director-General of OECS, Dr. Jules, urges a stringer bond of unity, sense of solidarity and fixed purpose for sub-regional body

(SKNIS): The 64th Meeting of the OECS Authority, which came to an end on March 03 at the Eastern Caribbean Central Bank (ECCB), saw much deliberations on current situations faced by Member States that require strong collegiality like never before, said Director General of the OECS (Organization of Eastern Caribbean States) Commission, Dr. Didacus Jules.

Speaking at a press briefing to bring to a close the meeting, Dr. Jules said “I think that it is no secret that the world is facing great transitions; there are movements of great transitions. We have the Brexit looming ahead of us. We have a new and very different administration in place in the United States and a lot has to be carefully examined. We now need to think more strategically. The current situation requires that the OECS accelerate the pace of integration so that we can converge efforts with a stronger bond of unity and a sense of solidarity and fixed purpose.”

He said the Heads of the OECS spent some time discussing the parameters of that collaboration in looking at ways of pooling certain resources.

“For example, diplomatic representation, ensuring that we are able to rationalize this and that we are able to share resources and put our votes and heads together in various critical international fora at this time to have a stronger presence,” said the director-general.

He said that Heads were apprised on the status of negotiation with some of the other territories in the Eastern Caribbean that have expressed a desire to join the OECS.

“We are at a very advanced stage of negotiation with St. Maarten to become a member,” said Dr. Jules. “Guadeloupe has recently submitted a formal application for membership. So all of this has been under consideration by Heads.”

The director general said that there are some critical areas that Member States should strengthen their presence in.

“These have to do with, for example, the mission in Brussels, which is currently a shed mission by four Member States,” he said. “We are hoping that we can have an expansion of the representation there; an economic mission in Geneva that deals with world trade issues, intellectual property rights and others and we are expecting that we will look at the strengthening of these institutions so that we can have a more powerful voice in the most significant location. For example, with Britain, the European Union, we need to ensure not just a strong presence in Britain but an equally strong presence in the European Union, which has been a major source of support.”

Dr. Jules said further discussions must take place on the role and place of the non-independent states in the OECS.

“With Martinique joining and the potential of St. Maarten and Guadeloupe coming onboard, it means we now have a significant number of members who are non-independent states,” he said. “A question that arises is how do we ensure that the interest of those non-independent member states is championed and supported by the member states. There has to be a synergy between those that are independent and not independent to see how we can work together to re-enforce each other’s position in a very shifting global landscape.”

Dr. Jules said that at the meeting the Heads spent significant time and effort in looking at the capacity of the OECS Commission and its ways of working. He said that they expressed their concerns about certain modalities of work and provided very distinct guidance with respect to expectations and how to ensure “that in the current international environment, that the commission is able to be fit for purpose, strengthen its way of working, is more responsive, speedy and flexible in its response to things so that we can face the wider world.”

“You have to be the change that you want to be and unless we have that capability, that institutional nimbleness and capability, we are not likely to meet the challenge of the times,” he said.

The director general said that it is now time “to press harder on the pedal of integration, but it is also the time to ensure that we are nimble and responsive and that the issues that we address are very closely aligned to the requirements of The Revised Treaty of Basseterre.”

Also discussed at the meeting was the free movement of people. Dr. Jules said that close attention must be placed on the free circulation of goods, services and capital “and to achieve that, it means that not only does the OECS Commission need to be in a nimble shape, but the other organs of OECS integration such as the Central Bank are able to play their role and for us to work hand in hand in glove and seamlessly to realize these objectives.”