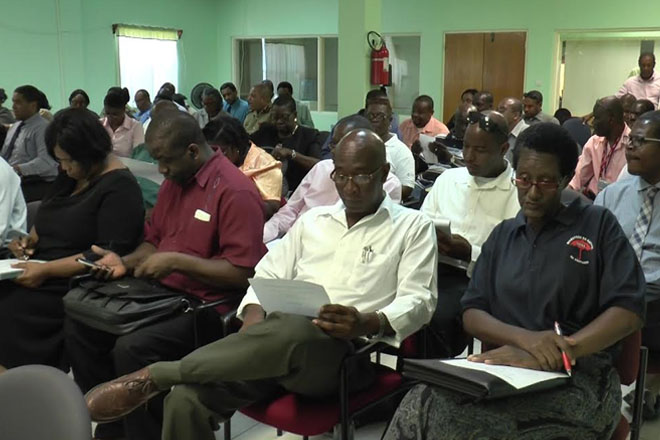 (ZIZ News) – The first Disaster Mitigation Council Meeting got underway at NEMA Headquarters on Wednesday, as heads of department, statutory bodies and representatives from the Meteorological Office gathered in an emergency meeting to tackle measures to be taken for an approaching tropical storm.

Tropical Storm Danny is likely to hit St. Kitts-Nevis in a few days, although it is at least five days out, according to weather models.

The St. Kitts Met Office says at 11am on Wednesday, Tropical Storm Danny was 1307 miles south east of St. Kitts-Nevis.

Projections so far indicate a path south east of St. Kitts-Nevis over the coming days. Tropical Storm Danny, according to the Met Officer, is 345 miles wide and is expected to cause serious impact.

It is likely that we’ll feel the full strength of the storm on Monday. The Met Office says when passing through the islands, the system will be a strong tropical storm or a category one hurricane at minimum.

Minister Wendy Phipps and Telca Wallace, who is NEMA’s Districts Coordinator, were also on hand to speak about hurricane shelter preparedness.

Storm warnings will be issued 36 to 48 hours ahead, as long as impact is certain.