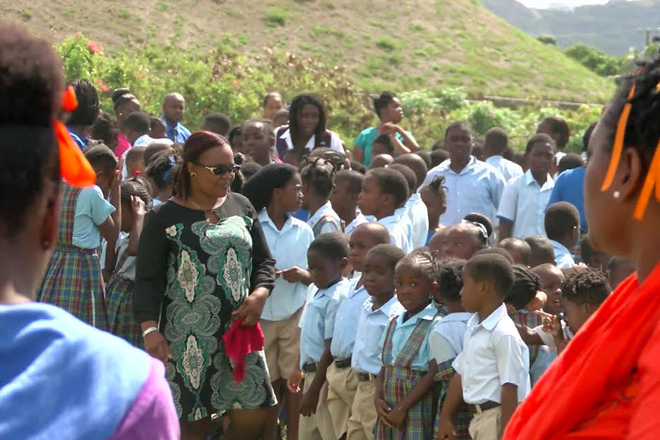 The goal was to test the responses of stakeholders in the case of an actual emergency.

The exercise began with an alert issued by the National Emergency Management Area warning of an earthquake north of Hispaniola and tsunami warnings for St. Kitts and other nearby islands.

NEMA Public Relations Officer Vesta Southwell spoke with ZIZ about why the drill was organized.

“The reason that we have to do this in this way is because in a real event we will not have much prior warning so we want to test our capacity so that in the event of a real hazard impact we are prepared,” she said.

The surprise emergency drill started at approximately 9:30 am with students being alerted of the need to evacuate the school’s premises.

Students proceeded away from the schools and toward the round-about and the field leading to the new road area.

Upon reaching to the final site, the students gathered in groups where headcounts were done by teachers of the respective schools.

According to exercise director Ivor Blake, one of the main purposes of the drill was to test the country’s emergency plan.

While the assessment has brought to light some things that can be improved, by all accounts, the drill was a success.

The St. Kitts Nevis Defence Force, the St. Christopher and Nevis Police Force, The St. Kitts Fire and Rescue Services and The Red Cross also took part in the exercise.