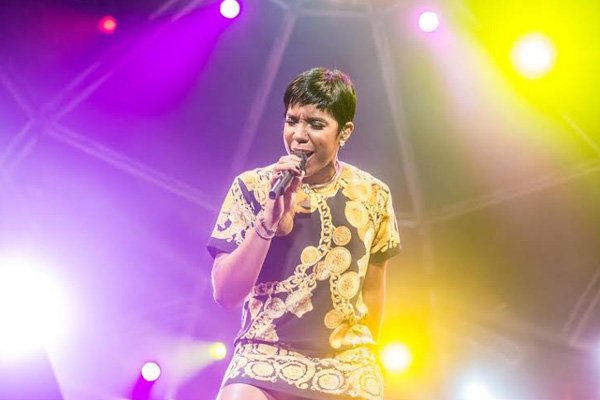 Saturday night normally boasts a diverse international lineup and this year was no different. The evening began with the Paul Peress Project providing back up for award winning vocalists Bill Champlin, Bobby Kimball (the lead singer from Toto) and Deniece Williams.

Their songs took the audience back to the music of the seventies and eighties with hits such as “Rosanna”, “Too Much, Too Little, Too Late”, and “Let’s Hear It for the Boy”.

Freddie McGregor was next on stage with his smooth reggae vocals.

He told ZIZ that his music is a reflection of his philosophy to speak out against injustice.

“I think I’m a…what do I call myself?…an activist for the people. Because that’s what we do in our songs. We write about the struggle. I mean when we see things are happening that are not right we speak about them through our songs. And that’s what we’re supposed to do,” he said.

Tessanne Chin, winner of last season of “The Voice” showcased her diverse song list with her own hits and covers of reggae and R&B classics.

She spoke with ZIZ about her recent accomplishments including performing for President Barack Obama.

“It was absolutely awesome,” she said. “They were just…I mean, talk about power couple. He full of swag and she gorgeous like nobody’s business and to be in the same room as people like Aretha Franklin and Patti Labelle and all those amazing women was just such an honour, such an honour, and one of the proudest moments of my life. To be on that stage”

Kelly Rowland, formerly of Destiny’s Child, kept the night going with her powerful vocals and a feel good medley of covers at the end of her set.

Sandy Point’s SMI, the only national act for the night, took the stage next bringing his own brand of hip hop and rap to the audience.

Singer/actor Tyrese brought the night to close with a performance dedicated to The R&B fans featuring hits such as “Sweet Lady” and “How You Gonna Act Like That”. He said he wants to return to St.Kitts soon and bring the other members of T.G.T., Ginuwine and Tank.

The international lineup brought down the curtain on what organizers have been describing as a successful 18th annual St.Kitts Music Festival.