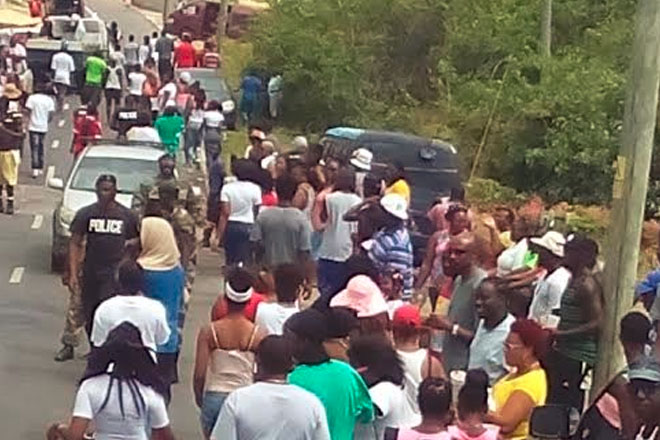 (RSCNPF): Commander Police Division “A” Superintendent Cromwell Henry and Commander of the Nevis Division Superintendent Trevor Mills have expressed commendation to the organizers and patrons of the 2016 “Green Valley Festival and WinFest” for an incident free weekend at the annual festivals in Cayon, St. Kitts and St. James Parrish on Nevis.

Both Superintendents noted, that reports from the respective Policing districts, the Cayon and New Castle Police Stations indicated that no incidents were reported during the activities held at the festival village, other venues or during J’ouvert and parade activities.

“We had presence on the J’ouvert route and that may have reinforced the message echoed by the organizers for safe festivals. The crowd was large, and the revellers enjoyed themselves”, said Supt Mills of the Nevis Division. He added, “from a security standpoint J’ouvert and and all the other events were encouragingly safe. And I therefore commend the organizers for setting the tone and that contributed to the overall safety of the “Winfest” community festival.”

Supt Cromwell Henry of Division “A”, in which falls the Cayon Police Station expressed gratitude to the officers in the district who were on duty both from the Police and the St. Kitts and Nevis Defence Force. The Divisional Commander said, “your presence reinforced the message of the organizers, and clearly served as a deterrent to any anti-social behaviour at the ‘Green Valley Festival’.” He told the officers that being out and about was a contributing factor. “Your efforts and presence contributed greatly to the fun had by the revellers and by-standers. The community was able to truly enjoy the festival.”

Head of the Operations Directorate, Assistant Commissioner of Police Terrance James, also commended the organizers for their obvious efforts in promoting a safe festival and said, “I want to encourage all event organizers to add patron safety to their event planning efforts, and make it a top priority so patrons can truly enjoy their events.

The ‘Green Valley Festival’ and ‘Winfest’ are two of the many community centered festivals in the Federation, both climax during the Whit Monday holiday weekend.