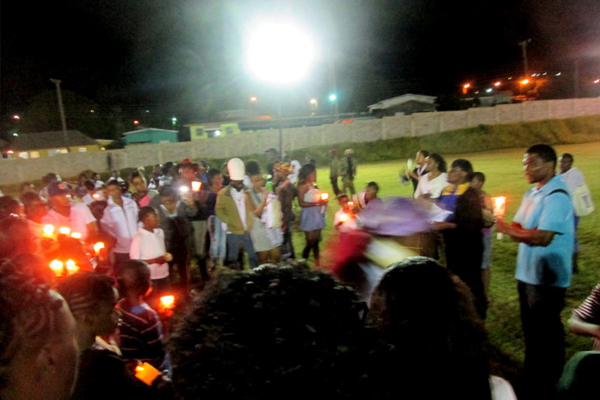 The gathering of mourner’s men, women and children alike, walked from ‘Points’ in Upper Monkey Hill and proceeded into Parray’s Village, singing gospel selections, before assembling on the St. Peter’s Football Field where a tribute ceremony was held.

More than 100 family members, friends and other mourners attended the solemn event.

Speaking to the gathering, Dr. Drew offered his condolences to Kevon’s family members, friends and others saddened by his death.

Dr. Drew who grew up in Upper Monkey Hill, recalled conversations that he and Kenny had about baby Kevon after ‘T’ became pregnant with the then couple’s first child.

“Kevon grew into a good young man. We know that he is gone but he will not be forgotten.”

Dr. Drew thanks all who attended the candlelight vigil as well as individuals and families who have offered prayers and sympathy to Kevon’s family during this time of grief.

The funeral service for Kevon Gordon is scheduled to take place on Wednesday (Feb. 19) 3:00 p.m at the St. Peter’s Anglican Church.