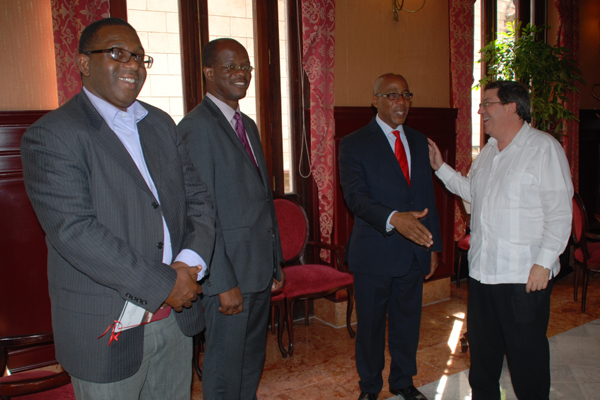 Basseterre, St. Kitts — Deputy Prime Minister Dr The Hon Earl Asim Martin and his delegation met with His Excellency Mr. Bruno Rodriguez Parrilla, Minister of Foreign of Cuba. The Honourable Patrice Nisbett, Minister of Foreign Affairs of St. Kitts and Nevis and his Cuban counterpart were able to discuss and consolidate a number of issues and matters that arose out of the previous meetings that were held with the different Government Ministers of The Republic of Cuba. Some of these issues included matters relating to energy with an emphasis on the development of renewable energy, in the area of health special focus was given to the treatment of diabetes and it related complications with a view of employing Cuban medical discoveries and medicine to reduce the incidence of amputations in St. Kitts and Nevis. In the area of agriculture the discussion centered around the transfer of technology in the field of organoponics and the building of capacity in the agricultural sector as it relates to disaster risk management. In the area of trade, the Ministers discussed a review of the performance of trading relations between St. Kitts and Nevis and the Republic of Cuba with a view of ensuring that it is enhanced so that greater preferential market access of goods and services can be achieved between both countries.

The delegation later in the day visited an organoponic farm to get a first hand experience of how science and technology can improve agricultural production in an environmentally sustainable manner. During the tour, it was highlighted that no chemical fertilizers are used and also biological control methods are employed to keep pests and insects from harming the crops. The farm also employs a highly specialize technique of irrigation. These methods result in increases in yields and better quality produce which impact the price obtained in the market for the crops under cultivation.

The Minister and his team were advised that the farm was able to produce yearly 130,000 tonnes of food which was consumed by about three quarts of a million people thus ensuring food security for the Cuban people. The farm consist of less than 2 acres of land and it is under cultivation with 27 crops including: carrots, scallions, string beans, lettuce, radish and leeks. The farm is manned by a resident Agronomist and who oversees the work of eighteen employees. According to Minister Martin, “this type of farming demonstrates what can be done on a small acreage of land and we are in discussions with the Ministry of Agriculture in Cuba and the Ministry of Foreign Affairs and this will be followed up with the Vice President of Cuba to see how we can have some technical collaboration in organoponics.”