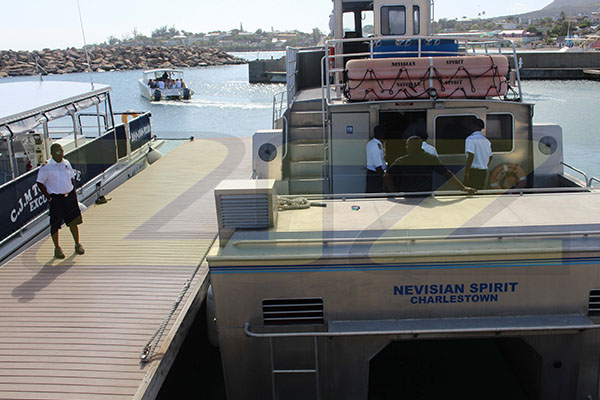 (ZIZ News) – On Wednesday afternoon a collaborative effort between the Royal St. Christopher And Nevis Police Force and the Customs And Excise Department led to the seizure of drugs onboard motor vessel “Nevisian Spirit”, a boat operated by staff of the Four Seasons Resort in Nevis.

“This afternoon, the police are here as a result of information received and surveillance conducted that there would be a delivery of a package to a vessel here at Port Zante Marina,”  he said.

“Surveillance was conducted and we realised that the vehicle approached and someone came out and delivered a package. As a result of that, the K-9 was called in and also Customs. So we had that joint operation between Police and Customs, along with the K-9 Unit, and as a result of that joint collaboration, we were able to retrieve or seize two bales of compressed marijuana. So far, a person of interest will be assisting us in our investigations and our investigations will not end here but will continue,” he added.

ZIZ reporter: “What is the situation with the ferries that are here? We notice that some tourists were congregating in a corner then had to be transported on another vessel. Can you speak to that?”

Inspector David: “That vessel would’ve been a normal movement of persons. You know people use different means and different ways of carriage or transportation of whatever they have to transport so this vessel was just one and normal passengers were amongst it at the time but as a result, we have to ensure we separate those who are not involved from those who are involved and that is what you saw occurred at this time.”

David said the drugs were found onboard the vessel at about 1:30 pm.  He said they’d need to do some more investigations before anyone can be held accountable.

“Investigations will reveal that. Like I said, it has not ended here. We will continue our investigations but the players thus far were a part of our surveillance and investigations later will reveal any other further actions that will be coming from the police and customs,” he said.

David could not definitively say whether the vessel came from Nevis with the package to be collected in St.Kitts.

“Based on our surveillance, we looked at the exchange of the package and we saw when the package was delivered and then as a result, we conducted that joint operation in terms of investigating it and it was discovered,” he said.

He said he could not confirm a link between the drop off or the pickup and the vessel itself.

ZIZ will keep you up to date as the investigation progresses.