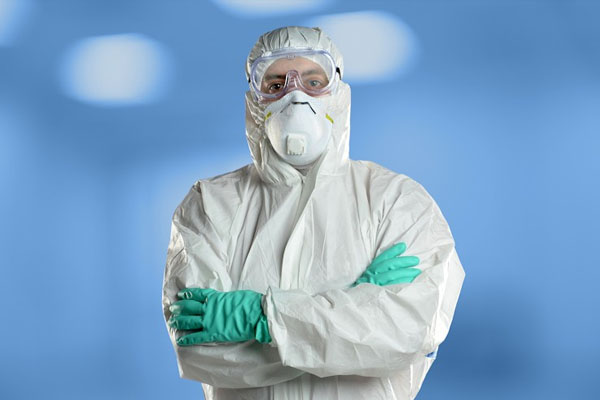 New York, United States — Since the first case of Ebola was diagnosed in Texas, fears of an outbreak of the deadly virus in the US have sparked a surge in sales of personal protection gear and hazmat suits among do-it-yourself pandemic preparedness buffs.

Just one day after news broke of the landmark case in Dallas, CNBC reported that sales of one type of full-body protective suit climbed by 131,000 percent on Amazon, while demand for gas masks and Ebola survival guides also spiked.

Business appears to be booming for established emergency preparedness companies that already sell pre-packaged kits to the tune of several million a year. These include QuakeKare, Mayday Industries and Guardian Survival.

That’s not counting the upstart start-ups, like AXP (Anti-Extinction Products) founded by 24-year-old Kylie Holm, who rapidly expanded her product line from preparedness kits for everything from rugged terrain to hurricanes.

These days, the biggest selling kits for Ebola are not exact duplicates of those donned by healthcare workers on the frontline of the fight against the deadly disease.

QuakeKare’s US$34.95 “deluxe” kit is a one-gallon ziploc bag stuffed with safety goggles, a face mask, 5 millimetre thick gloves, disinfectant wipes, biohazard bags and a hooded bodysuit from DuPont. Its elastic cuffs snap tight around the wearer’s wrists and ankles, but it is not air-tight, like the suits used by the CDC.

Industrial grade tear-resistant suits range in price from US$77 to over US$1,000 and have been heat-sealed at the seams and advertised as an impermeable barrier for 280 chemical threats, including agents used in biological warfare.

The level of protection provided by all of these suits depends, to some extent, on the diligence of the user and the risk posed by environment.

What’s known for sure is that they are hot, uncomfortable and unwieldy, and have to be taken off and disinfected with meticulous care. The vexed question also remains of how to know exactly when it’s necessary to suit-up.

The hazmat suits and accessories nevertheless appeal to survivalists who call themselves “preparers” or “preppers” and who trade advice through online forums such as the American Preppers Network.

While not all preppers have an apocalyptic mindset and say there’s no reason to panic, they are committed to preparation.

According to Organic Prepper, a popular blogger in the prepper community: “Panic may very well ensue, but it’s an indulgence you can’t afford when you have a limited window to acquire the things you may need.”