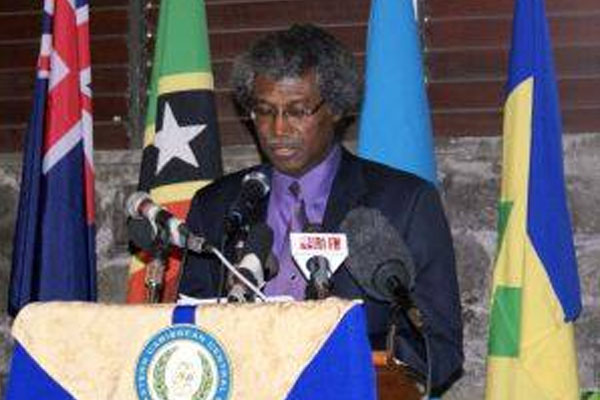 Basseterre, St. Kitts (CUOPM) — The private sector in the Eastern Caribbean Currency Union (ECCU) has a very important task of changing its structure and orientation to compete in the international environment if the sub-region is to achieve sustainable rates of growth.

Governor of the Eastern Caribbean Central Bank (ECCB), Sir K. Dwight Venner said the instruments and agents which are in possession to attain the ECCU objectives are the government or the state, the private sector and the financial sector.

“In societies such as ours the state has a very important role to play in setting the rules of the game, providing law and order, regulating the economy and the financial system, and giving incentives to encourage productive activities. The state, very importantly, provides critical physical and social infrastructure which is the platform on which the private sector must perform to drive the economy forward,” said Sir Dwight at the 17th Annual Consultation on the Economy.

He said that the financial sector in the ECCU also has to be restructured to be an effective instrument for the mobilization of savings and their allocation to production instead of the overwhelming portion going to consumption activities.

The Central Bank Governor noted that Prime Minister the Rt. Hon. Dr. Denzil L. Douglas in his New Year’s Address to the Nation “captured the essence of the fundamentals necessary to propel us forward both in St. Kitts and Nevis and the Currency Union as a collective association of states united in an economic union.

Sir Dwight said Prime Minister Douglas highlighted the domestic actions which were taken and which still have to be taken to address the fundamental problems.

“However, he clearly outlined the external environment of globalization in which we exist and will have to cope with as this process is clearly not reversible. He also struck a critical note with respect to the OECS Economic Union, namely, the need to reduce the cost of government and to increase its efficiency and effectiveness through close collaboration. The cost of providing public goods and services is extraordinarily high for very small states and constrains our ability to compete both regionally and internationally,” he told stakeholders.

Sir Dwight further stated that St. Kitts and Nevis is now in a position to supply the leadership that is necessary to overcome the ECCU’s present difficulties and to assist in the development of the broader arrangement.

“The collective arrangements in the economic union, with a legislature in addition to the other organs and institutions of the OECS, allow each country to lead in different areas which will benefit the whole. It is a unique experiment in state and nation building which calls for these varied contributions to make us all stronger and more resilient to external shocks,” said the Central Bank Governor.

Sir Dwight noted that the critical factor in this whole process is going to be the quality of human resources we can put to the task and listed the seven factors which are important.

“Three involve physical matters, namely, the environment, energy and transportation. The next involves the quality of human resources, education and skills training and ICT. The seventh serves to bind these together namely the governance of states and business enterprises. We have to narrow the odds and increase the chances of our survival in this very challenging environment. It is only by careful planning, steadfastness of purpose and collective action that this will be achieved,” said Sir Dwight.