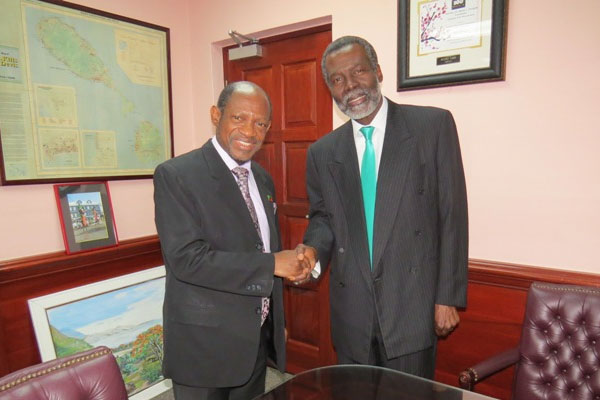 Education sector received bulk of OAS assistance in past 8 years

Basseterre, St. Kitts (CUOPM) — The education sector in St. Kitts and Nevis received the bulk of the resources offered by the Washington-based Organisation of American States (OAS) under the leadership of former director Mr. Starret D. Greene.

Mr. Greene, who succeeded Mr. Ken Parker in 2006 ended an eight-and a half year tenure in June and has taken up a new posting in Suriname.

During the period 2006 to 2014, the citizens of the Federation of St. Kitts and Nevis benefited tremendously from the OAS scholarship and training programme. During the said period, 35 citizens in St. Kitts and Nevis received scholarships at the undergraduate, graduate and doctoral levels to study at the tertiary level at colleges and universities in the Caribbean, North, Central and South America, in a wide range of fields.

“In addition to the regular OAS scholarship programme, dozens of citizens of St. Kitts and Nevis also benefited from the OAS’ Professional Development Programme, where professionals from throughout the civil service pursued short term courses in a variety of courses, on line and on site. These courses helped to widen their knowledge, updated their skills and strengthened their expertise,” said Mr. Greene in an exclusive interview with the Communications Unit in the Office of the Prime Minister (CUOPM).

Mr. Greene said OAS scholarships are given for a two year period and the organization awards US$30,000 per annum that covers tuition in full. An OAS scholarship also provides for books, a monthly cost of living expense, health insurance, lab fees and a ticket to the place of study and return.

“Today, there are dozens of OAS scholars working both in the public and private sectors and making their contribution to the development of St. Kitts and Nevis,” he said.

Between 2006 and 2009, the OAS St. Kitts and Nevis Office was instrumental in helping to build institutional capacity and supported the strengthening of the human resource capability within the Early Childhood Education Unit. This was accomplished through the provision of technical assistance projects and initiatives implemented by the Unit.

“Scores of teachers in the Federation of St. Kitts and Nevis received practical training in Early Childhood Education and a wealth of material including visual aides and manipulative for pre-school children were made available to improve the quality of learning and aide in the effective development of young children,” said Mr. Greene.

He also disclosed that the Curriculum Development Unit (CDU) piloted a Dyslexia Project sponsored by the OAS through its Special Multilateral Fund for Integral Development during 2006 and 2008.

“The focus of this technical cooperation activity was to help teachers in the Federation of St. Kitts and Nevis to be able to identify children who were dyslexic and to position them to effectively support the learning needs and special requirements of these children. This project was also designed to provide suitable material to be used by teachers in order to stimulate learning while assisting dyslexic children in developing their leaning potential, unique abilities and special skills,” said Mr. Greene.

He also said that in addition, the CDU executed a technical cooperation project that was designed to assess and evaluate the reading abilities of children within designated grades, throughout the Federation of St. Kitts and Nevis.

During the period 2008 to 2010, an OAS sponsored project made it possible for the Federation to produce the first Curriculum for Special Needs Children in the OECS sub-region.

Moreover, the project also provided training not only for teachers who taught special needs children but also to those teachers in Primary and Secondary Schools in St. Kitts and Nevis who encountered children with a range of learning differences.

In 2010, the OAS approved a technical cooperation project submitted by the Ministry of Education that was designed to address the growing concerns about incidents of violence in and around school premises.

“The project focused on helping students to resolve conflicts and it also provided counselors and teachers with training on how to assist students to address conflicts through peaceful means. As in many OAS’s sponsored projects, parents were also included in this technical cooperation activity and they too received training as part of a holistic approach to dealing with the increasing incidents of fights, quarrels and tensions that were becoming increasingly prevalent in the school environment and beyond,” said Mr. Greene, who before his departure made a farewell visit to St. Kitts and Nevis’ Prime Minister the Right Hon. Dr. Denzil L. Douglas.