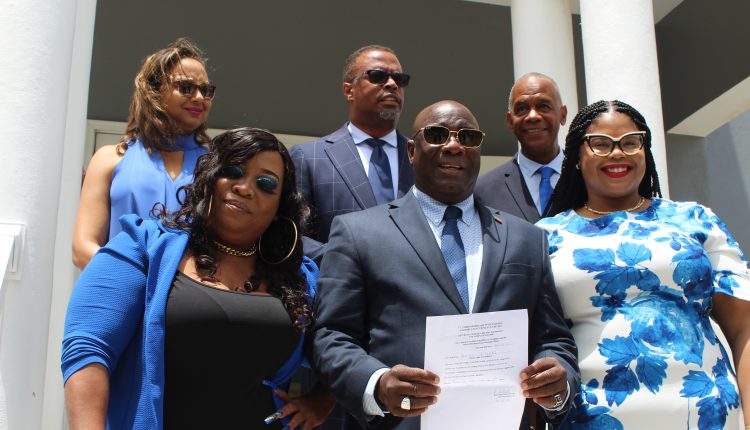 Mr. Caines was nominated by Cheryl Edwards of Craddock Road and Carlos E. Williams of Upper Government Road. Following his nomination, Mr. Caines spoke of his party’s journey to the upcoming elections.

“I represent Moral Restoration Movement which many of you know is a new party, the newest party in the Federation of St. Kitts and Nevis and we launched in July of last year with the intention of contesting the local election but given the circumstances befallen us, we are here being nominated for the federal election which is a very exciting moment; quite thrilled about it, and to the people out there, I would like to say to you that federal elections is different to the local election, and so, I am sure that many of you have been giving long mature thought to the way you are going to vote in this election.

“It is very important that you remember that for the federal election no party on Nevis can form the government. A party in Nevis will have to be an amalgamation or in a coalition with a party on St. Kitts but bear in mind also, that the new Moral Restoration Movement can amalgamate with any party on St. Kitts and it’s important that we are in that federation. It is important that we are in that set up, providing of course, that if the elections are inconclusive because we want to be a part of that set-up because we know that history has taught us that when there is a party on St. Kitts that has a controlling majority, Nevis is virtually excluded and we absolutely do not want that.

“That’s why we need a party on Nevis to be a part of the federal structure and the Moral Restoration Movement is ready like Freddie as we say in colloquial parlance, to be a part of that federal set up in St. Kitts, and work hard towards getting what is due to Nevis.

The Returning Officer for the Constituency of Nevis 9 also received the nomination of Dr. Patricia Bartlette, of the Nevis Reformation Party (NRP).

“I would just like to thank Jaedee Caines and Aleisi for coming out today to nominate me on this historic day. I’m so proud I would be able to represent the people of Nevis 9.

“However, it is imperative that we work hard to bring this one home for the people of Nevis 9. This is just the first step; we have the 5th of August to make sure that we register our votes. So I’m encouraging every one of us to come out on August 5th and make sure that we start to restore Nevis again for the people of Nevis so that all of us can enjoy peace, progress and prosperity,” Dr. Bartlette said after her nomination.

The Returning Officer for the Constituency of Nevis 9 also received the nomination of the incumbent the Hon. Mark Brantley, of the Concerned Citizens Movement (CCM).

Mr. Brantley was nominated by Lorna Hunkins of Marion Heights and Dennis Browne of Brown Hill. Following his nomination, Mr. Brantley had this to say:

“I’ve just been successfully nominated. I want to thank Lorna Hunkins and Dennis Browne, the one and only, for nominating me. Incidentally, Dennis Brown has nominated me in every single election I have ever contested so that’s my winning ticket.

“I’m happy this is part of the process to be nominated and then it is our hope that we move on to election day and I am expecting us to have a successful election. I believe the people of Nevis 9 have been with me since 2007, in fact this is the 8th time I’m being nominated for an election and I look forward, very much, to their continued support. Go out and vote in your numbers on election day. Keep up the momentum. Increase the momentum and vote CCM.”

In the Constituency of Nevis 10, Returning Officer Kayno David received the nomination of the incumbent the Hon. Eric Evelyn, of the CCM, at the nomination station, the David Freeman Center of Excellence.

“I must say what a privilege and a pleasure and an honour it is for the Concerned Citizens Movement to repose its trust and confidence in having me nominated once again as a candidate for the upcoming general elections in St. Kitts and Nevis.

“I’m very pleased that I’ve been able to be nominated today by Mrs. Hope Merchant and Mr. Berley Walwyn, and I just want to say once again to the people of St. George, Gingerland of Nevis 10, that I am pleased once again to be nominated as the candidate for you. I want to let you know that I’ve always been with you. You have always been with me and I’m looking forward for your overwhelming support as usual come the 5th day of August, 2022.

“I want to say to the people of Nevis that we are depending on you. We are confident that you will send all three of us to the Federal Cabinet,” he said.

Also contesting that seat will be Rohan Isles, of the NRP.

Mr. Isles was nominated by Miguel Mills of Chicken Stone and Tamerelle M. T. Browne of Rawlins village. Immediately after his nomination, Mr. Isles spoke of the experience.

“The emotions are flowing. Really and truly, it is an exciting moment. I am extremely happy and to thank the party and the wonderful people of Nevis 10   for granting me the opportunity to serve and so step 1 completed, we move on   August 5th and we are hopeful the people of Nevis 10 understand what is at stake and accept that my representation will bring fruits to this wonderful parish and district,” he said.

At Newcastle Police Station, the nomination station for the Constituency of Nevis 11, Returning Officer Emileta Elliott received the nomination of Dr. Janice Daniel-Hodge, of the NRP.

Dr. Daniel-Hodge was nominated by Corrine Hodge of Newcastle village and the Hon. Joseph Parry of Colquhoun Estate.

“Certainly, today is a day that I never imagined would happen. It is rather emotional for me and I do look forward to having the opportunity to help the people of Nevis regain the pride that they once had, and to put Nevis back on to a path of sustainability where all are welcome and we could enjoy living in peace and harmony once again,” she said moments after her nomination.

The Returning Officer for the Constituency of Nevis 9 also received the nomination of Mrs. Patricia Mills-Jeffers, of Webbe’s Ground of the MRM.

Mrs. Jeffers was nominated by Yvette Brandy of Barnaby and Malvern Williams of Fountain Village. Following her nomination, Mrs. Jeffers spoke of the experience.

“It is really an auspicious occasion and I’m extremely happy and very moved for this historic occasion, where I am the first female that has been selected as a candidate for the new party, the Moral Restoration Movement.

“My colleague and I Samuel Caines…we are very excited and we are looking forward to winning our candidacies to serve the people of Nevis in its rightful way, and to all our supporters out there, we say thank you in advance for giving us that chance to have a seat at the Federal table, and we promise and we would endeavour to champion the cause for Nevis,” she said.

That seat will also be contested by the incumbent the Hon. Alexis Jeffers, of the CCM, who was nominated by Shaniele Skeete of Shaw’s Road and Neelia Maynard of Jessups Village. After his nomination, Mr. Jeffers gave his thoughts on the upcoming elections.

“I am holding in my hand the evidence that I have been duly nominated today. This process is necessary because unless you go through this process of course you can’t be elected eventually, and I do believe come August 5th we’re going to be victorious in this Federal Election.

“We’ve brought some issues to the people but the main issue is that we are fighting for Nevis’ fair share, and the people of Nevis in overwhelming numbers are gravitating to that issue that we’ve brought forward, and I do believe come August 5th the numbers will speak for themselves.

“I also want to say this is my 4th Federal Elections, and I do believe over the years I’ve shown to the people of Nevis 11 that I am the best possible representative for this area, and as such I’ll continue to do the work that I’ve been mandated to do as the representative of Nevis 11.

“So Nevis 11 is strong. We are certainly confident about our chances in these elections, and indeed numbers will show come August 5th that people of Nevis 11 do believe that the CCM party and Alexis Jeffers are the best to represent them in Basseterre. I will continue that representation, and do so with all the confidence that the people would have placed in us,” Mr. Jeffers said after his nomination.

The electorate in St. Kitts and Nevis will go the polls on August 05, 2022, to elect their parliamentary representatives and a new government of the federation.