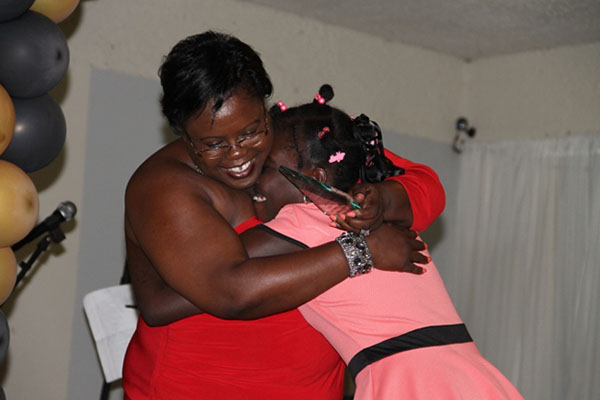 NIA Charlestown Nevis –A number of youth on Nevis were honoured for their achievements and efforts during 2013/2014 but none was as heart-warming and memorable as Husaene Martin who was awarded with the Hon. Hazel Brandy-Williams Award for her selfless act and team spirit during a sporting event earlier in the year.

Martin was among an elite group of Nevisian youth who were presented with recognition plaques at the Department of Youth and Sports Awards Ceremony and Gala on April 26, 2014 at the Occasions Conference Centre at the Pinney’s Industrial Site. In a pre-recorded presentation moments before she was awarded, she gave an insight into what had taken place which eventually brought her into the spotlight.

“My name is Husaene Martin. I attend the St. James’ Primary School. I am 11 years old and I live at Stoney Grove. At Inter-Primary I was running the 800 [meters]. I looked at the big screen [television] then I looked back and then I see Zwena [Jones] fall down and I turned back for her and I tell her brush off her clothes and she said she wasn’t going to run again. So I told her to run again and I wanted her to place and I myself wanted to place but I think about her, she’s my friend and I care about her.

“I feel if you have a person who you call a friend, you must care about them, love them and treat them good so when we grow up you don’t be bad,” she said to a resounding applause from those present.

The Youth Leaders Award were presented to Alice Swanston, Eric Evelyn, Dio and Govanie Hendrickson, Gerald Charles and Joseph Williams and for the Long-standing Group Award were Shekinah Dance Theatre, the St. Kitts and Nevis Pathfinders (Nevis), and the Nevis Cadet Corps.

All the awardees were presented with their appreciation plaque by Junior Minister for Youth and Sports in the Nevis Island Administration Hon. Hazel Brandy-Williams.