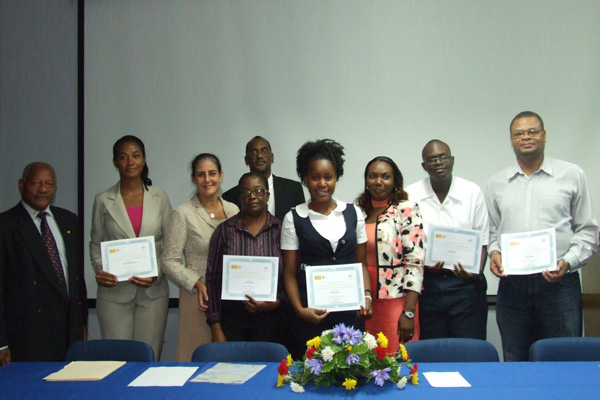 Embassy of Spain assists with teaching and learning Spanish

(SKNIS) In view of the growing interest for the Spanish language in the Caribbean and as part of its commitment to support Spanish language teaching and learning, the Embassy of Spain has donated five one-year scholarships for the highly reputed internet-based Spanish course Aula Virtual de Español (AVE) to lecturers and students of the Clarence Fitzroy Bryant College (CFBC).

Certificates of participation were given to Dr. Moyia Rowtham-Francis, Xuxa Garroden, Towan Jack, Avis Pemberton and Lesroy Williams at a brief handing over ceremony on October 28.

“In a globalized world as we live in today we need languages, we need a second language,” she said. “To me it is clear that in this part of the world, in this region, Spanish is the foreign language that makes more sense because you are surrounded by millions of Spanish speakers.”

President of the Clarence Fitzroy Bryant College Dr. Kelvin Daly noted that the participants are making not only CFBC but the country proud. He added that he hopes they would “continue as ambassadors on an upward trajectory to get even further qualifications in this language.”

Dr. Daly stated that “at the rate in which we are integrating as a world, we need seriously to have not only Spanish but French as core material not options but electives.” The President also encouraged early learning educators to play an integral role in getting young people to learn a second language.

“If you start early in primary school and continue on it becomes so much easier to learn because their brains are much more malleable at that point and open to suggestions,” he stated, noting that there is clear potential and benefits going forward as a country and as a region.

“Our students fit in so much better when they have that fluency,” he further noted.

The AVE has been designed by the prestigious Instituto Cervantes of Spain, the leading institution in the teaching of Spanish worldwide. It uses the latest teaching methodology and the guidelines encompassed in the internationally accepted Common European Framework for Languages.

The “AVE course” is successfully used by thousands of people in numerous countries. It focuses on quality learning and practical skills. It is Interactive, embraces all accents and the rich variety of the language and guarantees improved proficiency in written and oral Spanish.

The Embassy of Spain is committed to supporting the people of St. Kitts and Nevis in their efforts to learn a language, which due to the country’s geographical location, can open vast economic opportunities as well as facilitate the political integration of the Caribbean in the wider region.

The AVE course can easily be purchased by anyone with an interest in the language via the Embassy of Spain in Kingston (Jamaica).