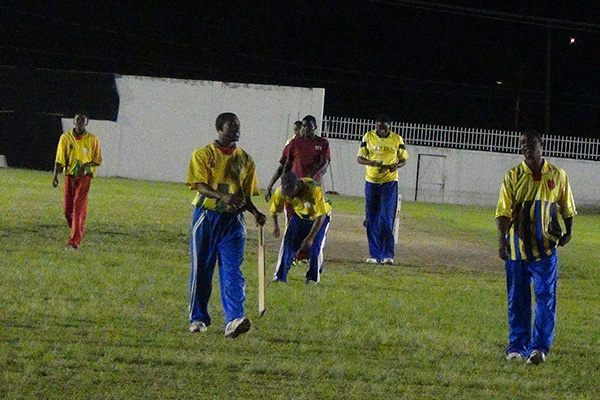 Empire wacked out of finals

The renowned Empire Cricket team has been unceremoniously dumped out of the finals of the ongoing Development Bank/Nevis Sports Department tape ball cricket league.

This, as they faced off with the less reputed Rawlins Bush Wackers team on the evening of Saturday 18th January.

Empire won the toss and confidently elected to bat first.

However, accurate and consistent bowling by the Rawlins men, soon had them on the back foot.  Not only were wickets falling but the scoring was badly restricted as well.

Empire struggled to 58 for 6 from their 10 overs with Captain Joel Simmonds top scoring with 15 and Gavin Wattley getting 12.

Leslie Huggins was the stand out bowler for the Rawlins team, with his 3 for 9. Carlon Smithen got 2 for 9 and Devis Elliot 1 for 12.

The Rawlins Bush Wackers then raced to their victory target in just 5 overs with Carlon Smithen in an ultra aggressive mood.  He struck 5 sixes with four of them coming from one over from the bowling of a hapless under 19 cricketer, Tevin Nisbett.

In the second male semi final match for the evening, SDA Jets literally folded to the Pennyless Allstars after restricting them to just 81 for 6 in their allotted 10 overs:

Alex Williams 23;Stuart Williams who had just arrived from New Zealand, got 10.

SDA Jets in response could only muster 55 for 7 from their 10 overs. Rakeesh top scored with 16 and Venrick Newton got 11.

Young Balgobin got 2 for 9; Gerard Charles 2 for 4 and Stuart Williams also bagged 2 for 4.

Pennyless All Stars winning by 26 runs.

In the only ladies semi finals played on the previous evening-Friday 17th January, Rozel’s team took care of Alex Stars.

Alex Stars batted first and scored 64 for 2 in their allotted 10 overs with Cressy Mills not out on 19 and they were helped in a huge way by extras which amounted to 34, which included 31 wides!

Rozel Liburd got 1 wicket for 10 runs

When Rozel’s team batted, they eventually secured victory but the game went into the 10th over—9.2 overs to be exact and they were 67 for 2 at the end.

Anya Fyfield was on 22 not out and Emilien scored 19.

For the Alex Stars, Simmonds got 1 wicket for 9 runs.

The finals are now set for Thursday 23rd January at the ET Willet Park as follows:

Both games are expected to be absolute thrillers.