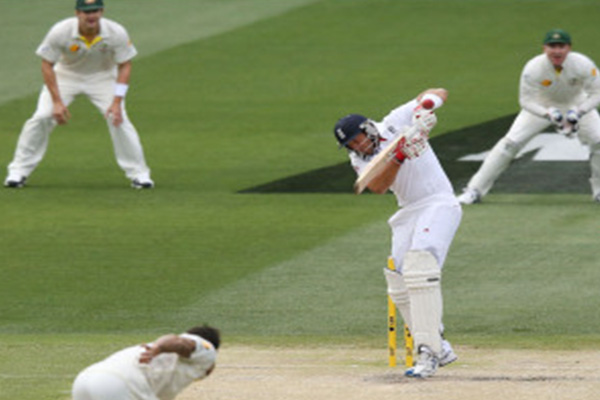 Belatedly, England drew Australian blood at the MCG. The claret was literal in the case of Chris Rogers, stunned by a blow to the side of the helmet from Stuart Broad, and figurative for all Australia’s batsmen, who demonstrated familiar frailty as they batted second for the first time in the four Tests and lurched to 9 for 164, still 91 behind, at the close.

The tourists’ success in cornering Australia intrigued a crowd of 78, 346, who were earlier thrilled by another burst of terrifying pace from Mitchell Johnson. His incisions have usually been followed by staunch batting, but on the sort of hard-fought day not glimpsed since the very first day of the series in Brisbane, Australia faltered in a manner to warm the hearts of the South Africa team due to host them in February and March, while also leaving the selectors with a few inconvenient worries that cannot be obscured by the glow of Ashes success.

Rogers was a lonely beacon of defiance for much of the day, his 61 occupying 222 minutes and absorbing the aforementioned blow to the head. The early wickets of David Warner and Shane Watson, each man out trying to force the pace, had a constricting effect on Australia, and it was not until Brad Haddin intervened with his familiar mix of bold strokes and good fortune that runs flowed with any sort of freedom.

Wickets did too, however, as James Anderson and Stuart Broad enjoyed a new flowering of their prolific pace-bowling partnership, taking advantage of a slow pitch that offered up tricky variations in pace and bounce and rendered driving particularly risky