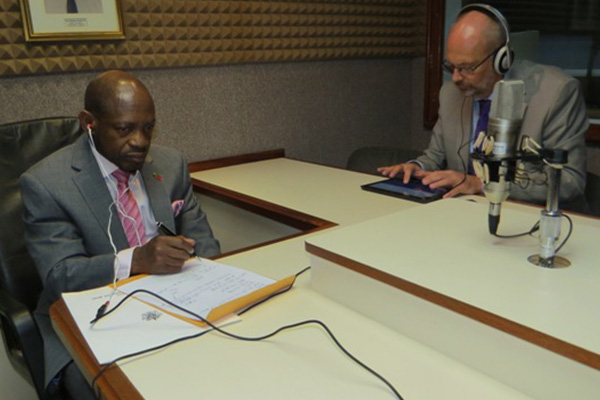 Basseterre, St. Kitts (CUOPM) – Head of the European Delegation to Barbados and the Eastern Caribbean, His Excellency Ambassador Mikael Barford has welcomed signs that the St. Kitts and Nevis economy is improving under the leadership of Prime Minister and Minister of Finance, the Rt. Hon. Dr. Denzil L. Douglas.

Prime Minister Douglas, who invited the European diplomat to be a guest on his weekly radio programme “Ask the Prime Minister’ on Tuesday said the successful transitioning out of sugar agriculture as the main sector of the economy into services to a large extent, has been well supported by the European Union.

Dr. Douglas noted that the locally-crated National Adaptation Strategy, which have been the blueprint that is been followed  for the past six years following the closure of the sugar industry has seen the twin-island Federation moving from its dependence upon sugar to one now led by services.

“We have created a competitive edge in this country exactly what the Adaptation Strategy was designed to do and in the various areas of services that we have tried to develop and some of which we have mastered,” said the St. Kitts and Nevis leader to listeners to the programme on ZIZ Radio, Kyss FM, Choice FM and Freedom FM.

The Barbados-based European official said the St. Kitts-Nevis Labour Government “is doing well because the payments are on schedule and that is an exceptional feat in an economic crisis.”

Ambassador Barford disclosed that Brussels has approval of a major disbursement of EC$23 million, evidence of the EU’s commitment to support St. Kitts and Nevis in this very challenging financial economic environment.

“So today, we are on the Prime Minister’s birthday signing an important document which is worth Euros 3 million (more than EC$ 10 million EC dollars and this is not just a work contract for the multi-purpose training centre,” Ambassador Barford told listeners.

He pointed out that if the project is successful, it will “set the scene for an innovation in the security sector that will represent a new, modern face of the sector and it will allow human resources to be trained up to the standards of regional and international policing and law enforcement,” said Mr. Barford.

In thanking Ambassador Barford for his personal birthday greetings, Prime Minister Douglas agreed with the European diplomat that St. Kitts and Nevis is one of the countries that can boast of the highest per capita support that has been provided by the European Union.

“I want to thank the European Union for its very solid show of support as we’ve gone through what had been a very painful decision, but which in the end I believe, has redound to the benefit of the people of this country and generally I believe we are much better off,” he said.

He pointed out that security is a major component in the 10th European Development Fund (EDF).

“When we felt very much challenged as a nation, because of the serious security and safety issues and challenges that we were experiencing. We sat down. Our public servants sat down with the Ministry of Finance and Foreign Affairs and National Security and we planned a programme that would enhance and strengthen safety and security institutionally, here in St. Kitts and Nevis,” said Dr. Douglas.

He expressed pleasure that the European Union is onboard and has provided $10 million dollars to construct a facility and to provide the necessary training, not only for the Police and Defence Force, but training for all security personnel in St. Kitts and Nevis.