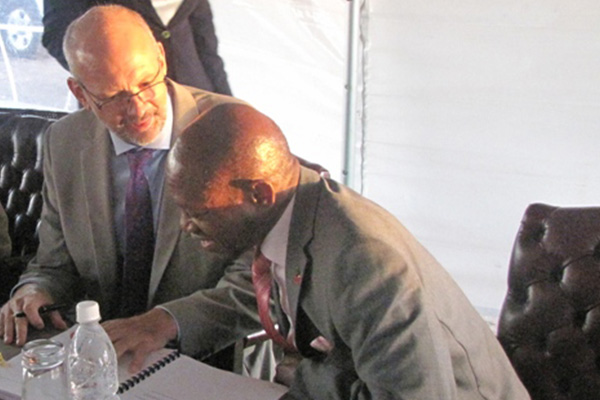 Basseterre, St. Kitts, (CUOPM) — Europe’s top diplomat in Barbados and the Caribbean is giving thumbs up to Prime Minister the Rt. Hon. Dr. Denzil L. Douglas and his Government to reform and improve the safety and security sector in the twin-island Federation and wished him success in completing construction of his vision for the construction of a training center of excellence.

“This is a special day for the partnership between St. Kitts and Nevis and the European Union, as a follow up of numerous consultations, the Government of St. Kitts and Nevis took the decision to seriously reform and improve its safety and security sector,” said His Excellency Mikael Barford, Head of the European Delegation to Barbados and the Eastern Caribbean at the groundbreaking ceremony for a new Multi-Purpose Security Training Center for the Security Forces.

“I am proud to express my appreciation for the political courage of the Government to entrust partnership around this sensitive sector to the European Union and its 10thEuropean Development Fund,” said Mr. Barford, who stated emphatically that citizen security is key for economic and social development and the Government of St. Kitts and Nevis should be commended for its efforts and progress in this matter.

“Today we are signing an important document, not just a work contract which would lead to the construction of a multi-purpose training facility for the security related public services in St. Kitts and Nevis.  This plan will lead to innovation in the security sector. It would represent a new modern face of the sector and it will allow human resources in the sector to be trained up to the standards of regional and international policing and law enforcement,” the European diplomat said.

“I wish Prime Minister Douglas, who holds the portfolio of national security much success with the construction of the training Centre. We are very encouraged by the decision of the (St. Kitts and Nevis) Government to co-fund the facility with EC$1.9million EC Dollars,” said Ambassador Barford, who praised Prime Minister Douglas for his “true commitment and ownership and also a sign of solidarity with sub-regional partners who may also benefit from the facility.”

Mr. Barford disclosed that the EU contribution to this contract is 2.95 million Euros which is equivalent to EC$10.8 million.

He said he was happy to note that the construction company is from St. Lucia, “another proof of the relevance of the OECS economic integration.”

The diplomat used the opportunity to point out that the European Union is supporting the security sector with technical support in the field of policy planning, human resources management and curriculum design.

Ambassador Barford invited Prime Minister Douglas “to be ambitious and to ensure that not only the building is there, but also the right people be put to manage it, so that the quality of the training offered can truly lead to capacity building.”

He said the Caribbean region faces many security challenges such as domestic abuse, violence, illegal drug trafficking and gang violence.

The European Union official is of the view that St. Kitts and Nevis will hopefully be better prepared to present and mitigate these issues when the training centre is up and running.

“Today we see nothing but a plain field but thanks to this contract, we expect this building to become a sub-regional centre of excellence of law enforcement, as well as human rights and national security. It will attract high quality new recruits and will allow the police sector to make their career more attractive; building on incentives and attracting not only nationals but also regional and international champions to share knowledge and build national and regional competence on the matter,” said Mr. Barford, comparing the bare building site to “a tiny seed of a tree.”

“The seed carries the full potential of a big beautiful tree, but the seed has to be nurtured, it has to be managed and it has to be protected before it reaches its potential and so it is with the training centre,” said Mr. Barford.