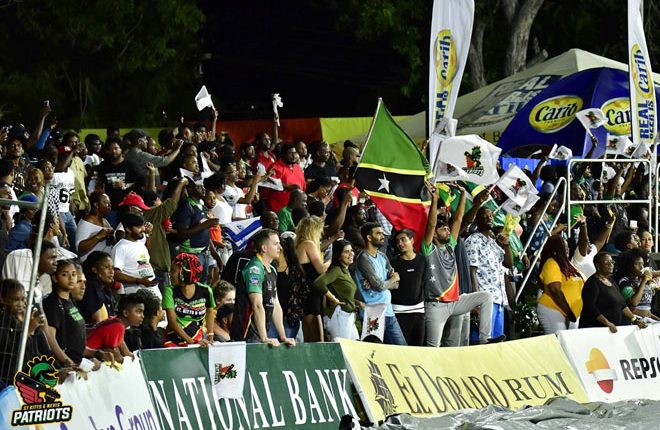 Excitement and Patriotism Shown for St. Kitts & Nevis Patriots Expected to Carry Over Into Independence 35

Basseterre, St. Kitts, September 05, 2018 (SKNIS): The St. Kitts-Nevis leg of the Caribbean Premier League (CPL) Twenty20 tournament wrapped up on Tuesday night (September 04) with a win for the St. Kitts & Nevis Patriots over the Barbados Tridents at the Warner Park Cricket Stadium.

Sitting among the fans that packed the Warner Park Cricket Stadium for the final match was the Federation’s Deputy Prime Minister and Minister of Sports, the Honourable Shawn Richards, who was interviewed by a CPL reporter during the live broadcast.

The Deputy Prime Minister said it was pleasing to see the high level of support that the team has gotten from local fans that closely followed the team’s progress during the tournament and who turned out in their numbers night after night to witness the five home games hosted from August 28 to September 04. He added that CPL is important to the country given the many positive spinoffs that benefit various spheres of activity.

“The tournament has been an extremely important one for the Federation of St. Kitts and Nevis. We have seen many benefits coming out of CPL,” Minister Richards expressed. “Apart from bringing persons here to St. Kitts and Nevis, we have also had a number of fringe activities surrounding the games here in St. Kitts and Nevis … You have vendors who are here being able to make money. I’ve seen persons selling t-shirts and even as you look around the field you would recognize a number of persons are wearing the CPL branded shirts or other shirts displaying the colours of the flag or the St. Kitts and Nevis [tag], so definitely I think it has been a good experience for all persons.”

The spirit of celebration and show of patriotism from residents and citizens are expected to carry over in the coming weeks as the nation draws closer to the 35th Anniversary of Independence on September 19.

Meanwhile, fans are expected to keep a close eye on the team standings as the cricket tournament winds down. The Patriots is currently in first place but this is expected to change given that four other teams still have remaining games to play. The knockout round begins on September 11 in Guyana.

Last year’s CPLT20 tournament created an economic impact of more than US$95 million across six Caribbean countries and the United States according to a CPL release.