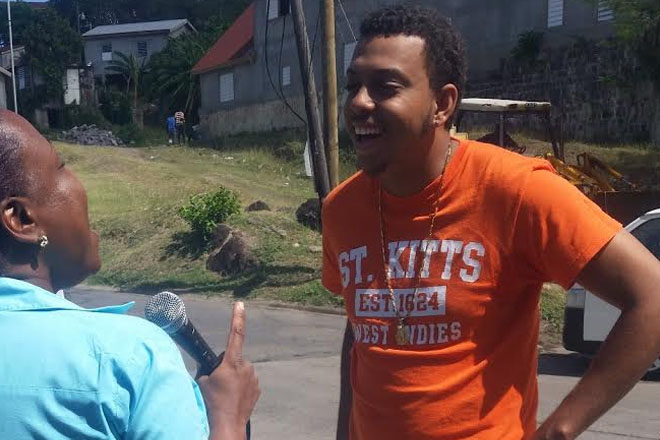 Basseterre, St. Kitts (SKNIS) — Taxi and tour operators have weighed in on the expansion of the Bloody Point Heritage Site through a survey conducted by the Department of Culture.

Raheem Thatcher, Research and Documentation Specialist at the Department of Culture informed that 100 surveys had been done on April 15 at the Challengers location of the site. He did note that while most responses were forthcoming, it had been challenging to get some tour operators to stop and respond. The survey findings are expected to be released to the general public in the near future.

Thatcher shared that he had journeyed to Bloody Point, Challengers, with a team of five, made up of the Department of Youth staff, family and friends.

“This survey is about the Caribs, the Kalinago people, that were massacred here at Blood Point River,” he said. “We are actually trying to gather information from the tour operators – doing a survey in order to look at possibly opening a research centre here which would be owned by Lucinda Phillip. If most are in favour, we will seek funding to open that centre for her. This will give the taxi and tour personnel more information on this area.”

Shavonni Herbert, a student, outlined some of the questions asked.

“I have been asking them how they feel about stopping at Bloody Point, Challengers on their tour,” she said. “Is it dangerous, is it a good place to stop, does it need more information, would they like more access for information about this heritage site?”

Jaydon Thatcher, a volunteer noted that after conducting initial surveys, some adjustments had to be made.

“There’s not much parking space for the taxis to pull over and there’s a lot of vehicles backing up,” he explained. “So then you find I have to rush the questions or summarize it, so I just come up with a short summary and I ask them questions pertaining to the heritage and what’s not. But I am finding out enough, all the information required.

The Bloody Point Historical Site had been given that name because in 1626 the Kalinago (who were referred to at Caribs at the time) thinking that the British and French settlers were encroaching on their land mounted an attack with Kalinago from nearby islands. Serita Duporte, a student, gives some details.

“During that war they went to fight in the river,” she outlined. The British and French overpowered the Kalinago, so there was a river of blood flowing – that’s why they gave it the name Bloody Point, and that’s how it became a historical site.”

The survey forms part of the St. Kitts-Nevis Creative & Cultural Industry (CCI) Development – Outreach Programme which falls under the St. Kitts Department of Culture Research and Documentation Unit (RDU). Through its Outreach Programme, the RDU is working with Lucinda Phillip, owner of a shop next to Bloody Point to expand it into “Kalinago Karbay” Bloody Point Heritage Centre. This would serve as a means of preserving the Kalinago legacy by sharing information about their culture. Ms. Phillip expressed her wishes.

“First of all I would like to sell things to eat to the tourists,” she daydreamed. “Things like cassava bread, and local drinks like sunset punch, ginger beer, mauby, sugarcakes and lots of other local things.”

Ms. Phillip went on to explain that she would be working directly with the RDU that would ensure that the visitors are provided with accurate information about the Kalinago people. Another partner is Dr. Corinne L. Hoffman who has been conducting archaeological research in St. Kitts as the principal investigator on the NEXUS 1492 Project. “Nexus 1492,” a programme conceived by Leiden University seeks to show how stakeholders in Caribbean Islands relate and value different kinds of heritage.