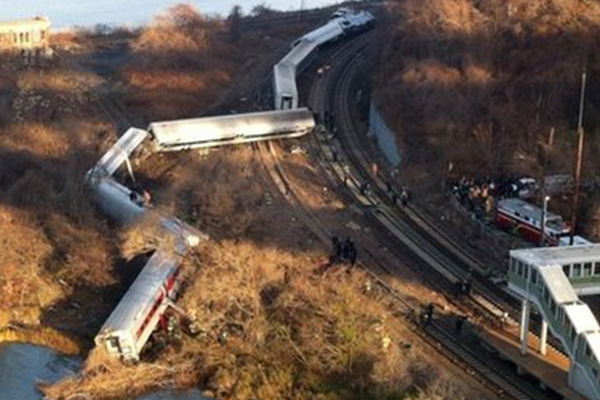 New York (CNN) — The commuter train that jumped its tracks in the Bronx was barreling into a curve at nearly three times the posted speed when it derailed, killing four passengers, federal safety officials said Monday.

Preliminary data from the event recorders aboard the train clocked it at 82 mph as it approached the 30-mph curve, where the Hudson and Harlem rivers converge, National Transportation Safety Board member Earl Weener told reporters. The data show the engineer cut the throttle and slammed on the brakes, but those moves came “very late in the game,” Weener said.

“This is raw data off the event recorders, so it tells us what happened. It doesn’t tell us why it happened,” Weener said.

Investigators questioned the engineer, William Rockefeller, and the rest of the train crew on Monday. Rockefeller told investigators he applied the brakes, but the train didn’t slow down, according to a law enforcement official who was at the scene and is familiar with the investigation.

But while the cause of the derailment has not yet been determined, investigators have seen no indication of brake problems, Weener said.

All seven coaches and the locomotive came off the tracks in the Sunday morning crash on New York’s Metro-North Hudson line. In addition to the four dead, at least 67 more were hurt. Three remained in critical condition Monday night, and 16 others were still hospitalized, hospitals told CNN.

The train’s recorded speed is not only far faster than the rated speed for the curve where the derailment occurred, it’s faster than the 70 mph posted for the section of track that led into the curve, Weener said. The force of the crash ripped apart the rails and a section of the track bed, leaving chunks of concrete strewn about the scene.

David Schanoes, a former deputy chief of field operations for the Metro-North line, said the data is “uncannily similar” to a July rail crash in Spain that left 79 dead.

“I would have to see all the data from the event recorder,” Schanoes told CNN’s Erin Burnett OutFront. “But clearly, from what has been captured, the train was overspeeding, and the request for emergency brake application comes too late for the train to be able to negotiate the curvature.”

Weener said authorities will be looking at the engineer’s recent work history and will examine his mobile phone, which is now in the hands of authorities.

In the Spanish crash, a court found the engineer had been on the phone with railway staff when the train derailed. But a preliminary review has found no reason to believe Rockefeller was using his phone at the time of Sunday’s derailment, a senior law enforcement official familiar with the investigation told CNN.

In a statement issued Monday evening, New York Gov. Andrew Cuomo said the data “makes clear that, as we suspected, extreme speed was a central cause of this crash.”

“The lives that were lost yesterday are a stark reminder that protecting the safety of all New Yorkers must be our top priority,” Cuomo said. “When the investigation concludes, we will make sure that any responsible parties are held accountable. My thoughts and prayers continue to be with the families of the victims of yesterday’s crash.”

The Hudson Line carried 15.9 million people last year. About 150 were aboard when the train derailed, authorities said.

“For a train to be going 82 mph around that curve is just a frightening thought,” said Schumer, D-New York, who appeared at a news conference with Weener. “The fact that it was going 82 mph even in the 70-mph zones before the curve started raises so many questions and is scary.”

Schumer said the tracks appear to have been in good shape, and the preliminary indication is that signals were working properly — “but it’s premature to blame anyone or anything right now,” he added.