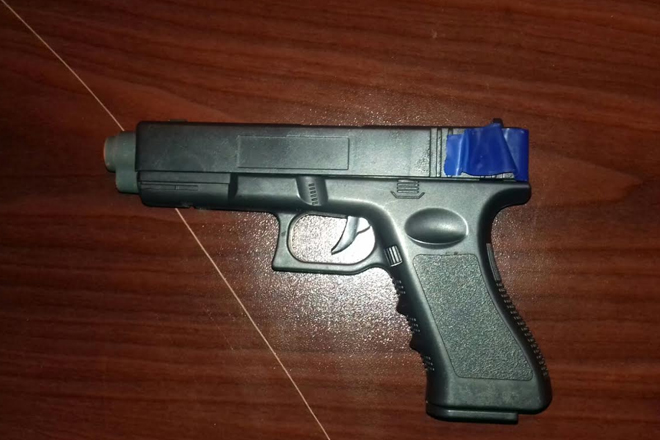 (RSCNPF): The execution of a number of search warrants and a subsequent search of neighbouring abandoned properties netted the Police two “fake” firearms, a shot-gun and a .9mm pistol. Additionally, a box containing 64 rounds of .22 ammunition was also found.

The searches were conducted in the McKnight area by officers of the Special Services Unit (SSU) and in Sandy Point (Crab Hill) by officers assigned to District “B” whose stations include Old Road, Sandy Point, St. Pauls, Dieppe Bay and Tabernacle.

No one was held accountable for the items. They were seized by the Police.

“The discovery and seizure of these items is an indication that the items used by the criminals to commit crimes are not kept on their premises. As we continue to search the abandoned properties and lots, and as continue our stop and search operations of both of vehicles and persons, we will continue to yield results” said Divisional Commander Supt(Ag) Travis Rogers.

“The find today is significant, the “fake” firearms could have been used to commit crimes and the ammunition to inflict injuries or death to our citizens, both are now in the hands of the Police,” he added.

The discovery of these two “fake” firearms and the ammunition comes on the heels of a similar success on Friday (August 19) in Nevis, in which a Smith and Wesson pistol with matching ammunition was found during a community patrol by officers of the Nevis Division.

To date 21 illegal firearms have been removed from our communities in 2016.