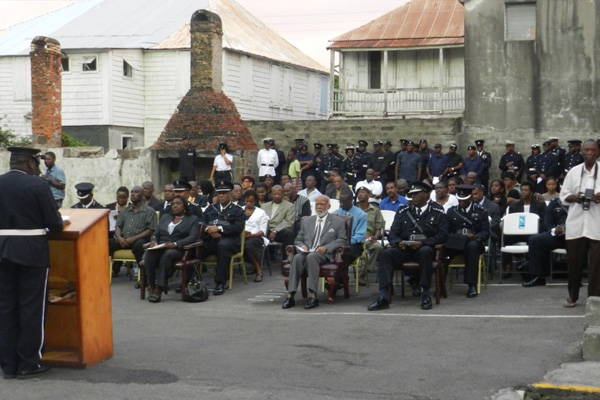 Basseterre, St. Kitts (SKNIS) — Emotions ran high on Thursday evening as members of the Royal St. Christopher and Nevis Police Force (RSCNPF) congregated in the Police Parking Lot on Cayon Street for a memorial service commemorating officers who died in the line of duty.

“All have given some, but some have given all. These men [whose pictures] are on the wall behind me have given all,” expressed Commissioner of Police Celvin G. Walwyn. He urged the men and women under his charge to be safe when carrying out their duties and said “never forget those that went before you, doing the job that you are doing in service to this country.

“To the families, thank you very much for providing your family members to this police force and we thank you for the service they provided. We respect and honour their passing in the line of duty,” Walwyn concluded.

His remarks were followed by the reading of profiles of the four honourees. Superintendent Cromwell Henry recounted Supt. Matthew’s integrity in the pursuit of justice. Inspector Diana Mills was teary eyed as was much of the audience, as she highlighted Sgt. Benjamin’s sincerity and upstanding character. She recalled how he often chased down suspects on foot, a clear sign of his determination to uphold the law. Cpl. Robinson and Constable Williams were remembered for their achievements and commitment to the force.

A memorial plaque was presented to each of the family representatives that attended the ceremony.

Sgt. Benjamin’s wife Mrs. Terrencia Benjamin credited the organizers for holding this inaugural event. “It was very good,” she said, admitting that while it served as a reminder of the day her husband died, it was a comfort to know that he is being remembered in this way.

Permanent Secretary in the Anti Crime Unit H.E. Astona Browne praised the police for the “invaluable role they play in the community” and noted that when any member of the agency loses their life “the nation, as a whole, looses a cherished and precious part of its existence.”

The fallen officers received a 3 shot salute from a firing party after which the musical piece “Taps” was performed.