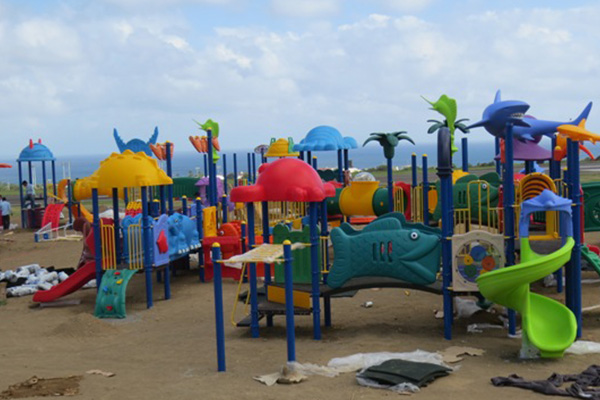 Basseterre, St. Kitts (CUOPM) – Installation of equipment for the Family Park at New Road is continuing.

Parliamentary Representative for St. Christopher 2 (Central Basseterre), the Hon Marcella Liburd, who is also the Federal Minister of Health, Community and Social Development, Culture and Gender Affairs said the facility when completed will be the first of its kind in the region and will be catering for all ages, from toddlers to the elderly.

For the school age children there will be a play ground with equipment for entertainment, for young adults there will be a gazebo where they can relax, an outdoor gym, and a track where persons could jog or walk as a form of exercise. Benches will be available that will cater for the elderly and parents who have come to oversee their children.

“From the very beginning when New Road was designed, for those of you who have an idea of what the plans were like, that area was always designated for a park. There was lots of talk about a basketball court, a football field, tennis court, all sorts of other sports and games were supposed to be there but that was always designated to be a park,” she disclosed.

It could also be promoted as a tourism product, as one of the stops that the tourists can make, especially when they have children onboard the cruise ships, and can come and have fun at the park.

“The Taiwanese are bringing in their experts to actually fit the equipment because they already know to fit that type of equipment from parks they have done in Taiwan and other places,” said the Minister.

“Our local people would be able to get in on the action because the place has to be fenced, so we will need someone who will get a job to fence it. We also would need some people to help to make some of the base for some of these equipments, so we do have some jobs that will become available for the local people and the people from the area to help to complete the family park.”

At the recent ground breaking ceremony Prime Minister the Rt. Hon. Dr. Denzil L. Douglas said the establishment of a New Road Family Park reflects the seriousness with which the Hon. Marcella Liburd takes her role as Minister of Health, Social and Community Development and praised the Cabinet’s lone female minister and parliamentarian for her determination to ensure that the nation’s children return to the high levels of free, fun-filled physical activity that were once a standard part of childhood, and which is so important to the physical and psychological health of the young.

“With the advance of modernity, we have all become shockingly sedentary. All of us – regardless of age – move lamentably less than we did in years gone by. Modern life has made it that way. And our nation’s children, like children all over the globe today, are no exception – attached as they have become, to their various electronic devices,” said Prime Minister Douglas, who noted that throughout the Caribbean, health care providers and statisticians have been lamenting the rise in childhood obesity and diabetes.