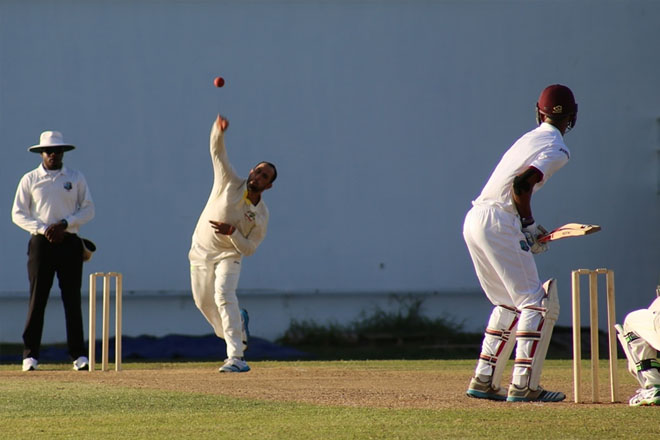 Fawad, Hazlewood take two each on day of toil

Sports Page — Given the fact their most recent Test match was in early January, it was perhaps understandable that Australia’s cricketers made a sluggish start against a doughty WICB President’s XI in Antigua.

Having lost the toss, the captain Michael Clarke watched on as a bowling attack missing Mitchell Johnson, Mitchell Starc (rested) and Ryan Harris (at home with his newborn son) was unable to follow up on the trio of breakthroughs made in the first session of a steamy, rain-speckled day.

The pitch at the Sir Vivian Richards Stadium was slow and not given to much assistance by way of bounce or extravagant turn, meaning Josh Hazlewood, Peter Siddle, Mitchell Marsh, Nathan Lyon and Fawad Ahmed all had to toil against batting that was for the most part sensible and stoic after some early tremors.

Hazlewood had given the impression he might be capable of running rather more swiftly through the local XI when he had Tyrone Theophile and the captain Leon Johnson both caught in the cordon during his precise new-ball spell, and Fawad experienced the joy of a wicket in his first over when Shaun Marsh leapt to claim a sharp chance at short cover from Sharmarh Brooks. The lunch score of 42 for 3 suggested some Australian batting before the close.

However the remainder of the day brought frustration and pause for thought, as Rajindra Chandrika, Shane Dowrich and Roston Chase all passed 50. Fawad found a useful, skidding delivery to foil Chandrika and Lyon tempted Dowrich to send a catch to mid-on, but otherwise there was little joy to be conjured.

Chase and Jason Mohammed had little trouble seeing the day through to a late stumps, though Hazlewood continued to beat the bat and Adam Voges hinted he may be a useful slow left-armer should Clarke decide to spare his back during the Tests. If the pitches are anything like Antigua’s, it will be a case of all hands on deck.