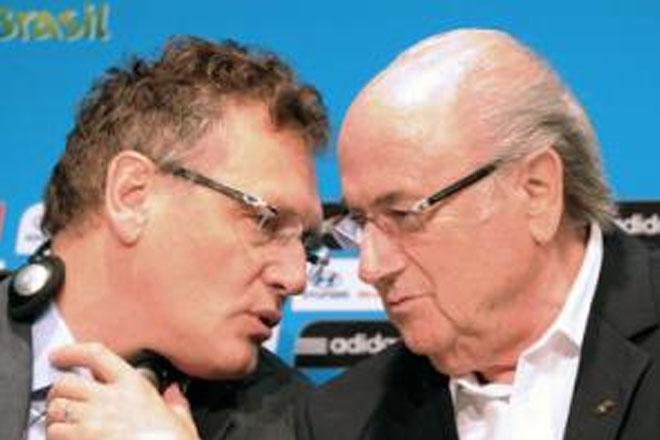 FIFA will give Swiss prosecutors access to key emails

Zurich, Switzerland (AFP) — Swiss prosecutors said FIFA agreed yeterday to hand over the emails of suspended secretary general Jerome Valcke, evidence that had been demanded as part of a massive corruption probe into World Cup bidding.

Swiss Attorney General Michael Lauber’s office said earlier that FIFA had imposed “conditions” before Valcke’s correspondence would be unsealed, but later announced that the emails were being made available.

The attorney general “will have access to all of Valcke’s emails as requested,” a statement from Lauber’s office said, adding that “on its own initiative”, FIFA agreed to give investigators all his electronic correspondence since May of 2015.

Lauber launched his inquiry that month after the US justice department announced indictments against 14 people — nine FIFA officials and five sports marketing executives — accused of bribery worth more than $150 million (134 million euros) dating back to 1991.

Lauber’s probe, which is separate from the US case, is looking at whether bribes were paid in connection with Russia and Qatar being awarded the 2018 and 2022 World Cups, respectively.

The emails of FIFA president Sepp Blatter’s former right-hand man will add to the troves of electronic data previously confiscated by Swiss investigators.

Speaking last week in Zurich, FIFA’s home, Lauber said his investigation was not yet at “half-time.”

The email handover from FIFA came as its executive committee gathered in Zurich, where top officials were to receive updates on the various crises surrounding world football’s scandal-ridden governing body.

Blatter is set to face the media in a highly anticipated press conference today.

Valcke was put on indefinite leave by FIFA last week over accusations he agreed to let World Cup tickets be sold at vastly inflated prices. The Frenchman strongly denied the allegations.

Lauber’s office indicated that FIFA had for some time specifically declined to make Valcke’s emails available, but the ousted secretary general has not been identified as the main target of the Swiss case.

Meanwhile, no details were given as to the nature of FIFA’s conditions for the email release and it was not clear what, if anything, ultimately led to Valcke’s correspondence being unsealed.

FIFA spokeswoman Delia Fischer told AFP in a email that the body had “responded to any and all requests received from the Office of the Swiss Attorney General and fully supports the investigation”.

The fallout from the investigation may be far reaching, as Russia and Qatar could be stripped of their World Cup hosting rights if clear evidence emerges that bribes were paid, FIFA officials have said.

Since its executive committee last met, the crises surrounding FIFA have intensified.

On Wednesday, the Swiss justice ministry approved the extradition to the US of Rafael Esquivel, a Venezuelan ex-FIFA official who was among those arrested in Zurich in May.

Switzerland has also approved the transfer to US jurisdiction of former FIFA vice-president Eugenio Figueredo, a Uruguayan, with extradition decisions on four other suspects due in the coming days.

Also last week, US Attorney General Loretta Lynch, whose May indictments uncorked the crisis at FIFA, said her case was expanding and was likely to see more people being charged.

Blatter’s press conference is scheduled for 2:00 pm (1200 GMT) today, after the executive committee receives FIFA’s internal update on the Swiss and US investigations.

Also on the agenda for the meet are the initial proposals from FIFA’s new reform committee, which has, among other measures, floated the idea of term-limits for the body’s president and greater financial transparency on compensation for top officials.

Separately yesterday, Brazilian football legend Zico announced that he does not yet have the support needed to qualify as a candidate to succeed Blatter as FIFA’s president.

He needs to win the backing of five national confederations to stand in the vote, but, speaking in Zurich, told reporters that he has no commitment supporters so far.

Blatter has agreed to step down following a special election set for February.