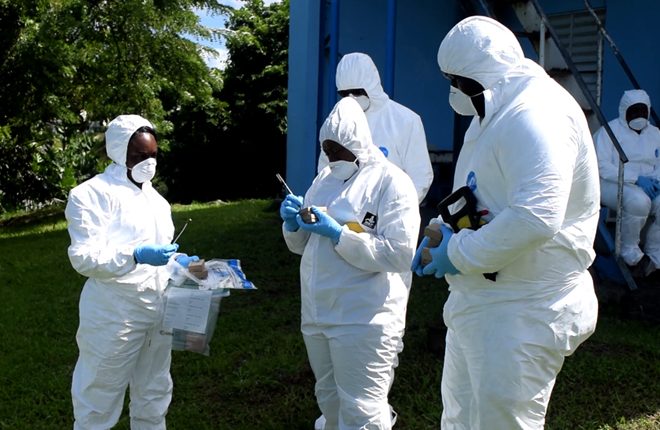 Crime Scene technicians of the police force’s Forensics Department who are participating in a two week Fingerprinting Workshop were tested during a mock exercise held on Wednesday.

There were two mock crime scenes with two different scenarios.

The first scenario depicted a businessman living in St. Pauls getting home from work and being attacked by two gunmen while trying to enter his house. He was robbed, shot and killed.

In the second scenario, a drug dealer is attacked in his apartment. He manages to run away but is shot several times in the back and dies.

Inspector Elvis Cordice of the Royal Antigua and Barbuda Police Force who has been the facilitator of the workshop, outlined the reason for hosting the exercise.

Director of Forensics Latoya Marshall-Lake said changes will be made within the department based on the level of skill shown by the technicians.

The Director of Forensics said the department intends to host continuous workshops and exercises executed internally. She said this will allow for the molding of the technicians into international certification.

The fingerprint workshop which was hosted to sharpen the skills of crime scene technicians began on Monday November 4 and will conclude on Friday November 15th.