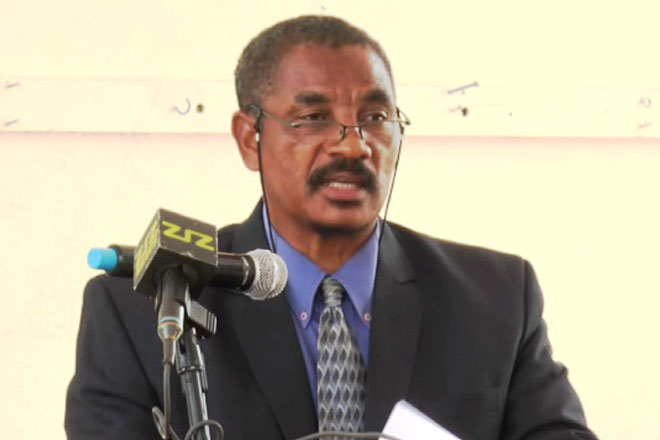 (ZIZ News) — The St. Kitts and Nevis Fire and Rescue Services has added to its fleet of emergency response vehicles with Thursday morning’s commissioning of a Rosenbauer Timberwolf Fire Tender.

The fire tender, which reportedly cost EC$1 million, has several special features. Its height allows it to safely fight brush fires. It also has four wheel drive capabilities and hose reels on both sides.

The country’s Prime Minister, Hon. Dr. Timothy Harris was represented at the ceremony by his Permanent Secretary, Osbert DeSuza, who read the Prime Minister’s speech.

He said the purchase of the new appliance was symbolic of the government’s commitment to the safety and security of the Nation’s people and the Fire Department more specifically.

“The commissioning of this fire tender, procured at a cost of EC$1 million is a clear demonstration of the commitment of an administration that is fully cognizant of the very important role played by the staff of the organisation. It is also evidence that the government is working for you,” he said.

Dr. Harris, through the message, said he remains committed to addressing the concerns raised during a recent meeting with fire officers.

DeSuza reminded of the government’s policy to support the education and training of fire officers. He encouraged them to capitalize on opportunities that become available.

“I urge you to take advantage of the opportunities for training as they arise. Additionally, you need to take some responsibility for your own advancement. Go online and learn as much as you can about effective techniques and advancements in fire fighting and search and rescue operations,” he added.

While DeSuza pledged that the government will continue to support the fire and rescue services department, he called on private sector entities to do the same.