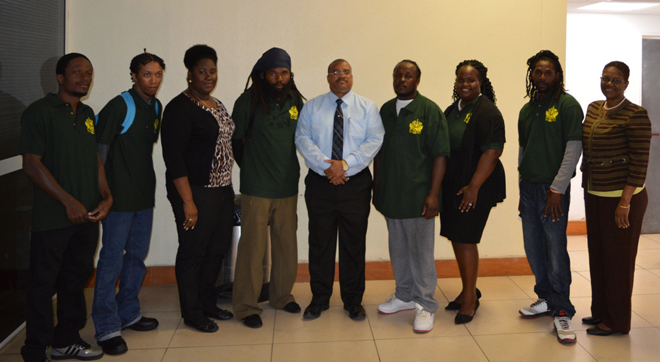 (SKNIS): Thursday, March 15, marked the commencement of St. Kitts and Nevis’ first phase of the Canada-Caribbean Seasonal Agricultural Workers Programme (CCSAWP) for 2018, as the first batch of participants departed the federation for Canada to assist Canadian farm employers during the planting and harvesting seasons.

The group of five, who departed St. Kitts on March 15, was given an auspicious sendoff at the Robert Llewellyn Bradshaw (RLB) International Airport by officials from the Ministry of Labour, which is the ministry that coordinates the recruitment of local workers for the programme.

Permanent Secretary in the Ministry of Labour, Ron Dublin-Collins, expressed his delight and that of the ministry for being able to assist persons in this venture.

“We are excited for the young men who have this opportunity to go to Canada again this year and for the increased numbers that we are able to work with for the new year. That has come as a result of the work between the Department of Labour and the office in Canada,” said the permanent secretary.

Mr. Collins said that Government officials have confidence in the Programme’s ability to enhance the livelihoods and cultural appreciation for participants. As such, several initiatives were introduced or changed to make the programme more attractive to locals based on feedback received during debriefing meetings upon the workers return to the federation. This year, the introduction of polo shirts that highlight that the workers are from St. Kitts and Nevis was one such initiative.

CCSAWP is a Government of Canada programme that was introduced in 1966 between Canada and Jamaica but has since expanded to include Mexico and numerous other Caribbean countries. It is available to persons who are at least 18 years of age from any of the participating countries.

According to the Foreign Agricultural Resource Management Services (F.A.R.M.S) in Canada, the foreign countries that provide seasonal workers under the Commonwealth Caribbean / Mexico Seasonal Agricultural Workers Programme are Mexico, Jamaica, Republic of Trinidad & Tobago, Barbados and the Organization of the Eastern Caribbean states that includes Antigua and Barbuda, Commonwealth of Dominica, Grenada, Montserrat, St. Kitts-Nevis, Saint Lucia and St. Vincent and the Grenadines.