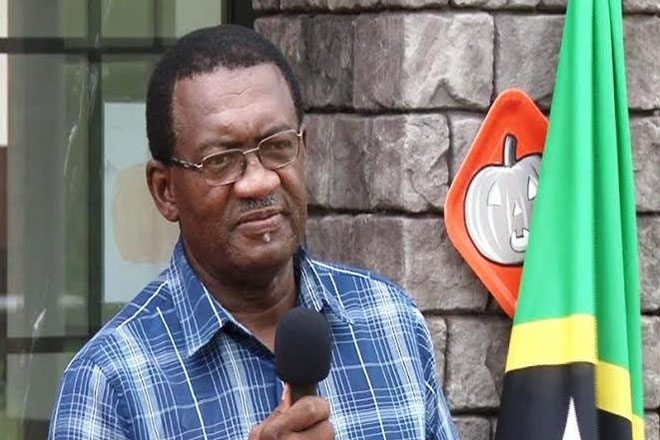 Basseterre, St. Kitts (SKNIS) — Honourable Eugene Hamilton, Minister of Agriculture, has hailed the first ever Pumpkin Festival and Arts Exhibition at the St. Kitts Eco-Park Grounds at Sir Gilles Estate in Sandy Point, as a success, as it promotes locally grown produce. The festival was held on Saturday, October 3rd.

“This action today demonstrates that you are encouraging people to buy local,” said Minister Hamilton, adding that it also demonstrates the commitment of the Government of St. Kitts and Nevis and the Republic of China (Taiwan) to use the Eco Park to interface between locals and tourists alike who visit the site.

The Agriculture Minister lauded the farmers, stating that they are practicing a trade in difficult circumstances.

“Agriculture faces some challenges, among which are climate change, as well as consumer choices and preferences,” he said. “For the year 2015, we have experienced the worst drought we have ever had in six to eight years.”

He added that due to low recorded rainfall, every farmer has been through a year where almost anything grown or put in the soil has been parched.

“This is one of the reasons why I want to congratulate the farmers and thank them for their performance,” he said, noting that the farmers need the help of everyone, especially those in government, in order to help them provide the food that is necessary for local consumption.

Minister Hamilton said that persons have been lead to believe that everything foreign is better and so before they buy the locally grown produce, some people go to the supermarkets to buy the stuff that is imported. This, he said, affects the productivity and the profitability of those in the farming industry.

Minister Hamilton reflected on the long-standing partnership between the Federation and Taiwan.

“It is 32 years where we have demonstrated that we share the same values,” he said. “Thirty-two years of mutual respect, 32 years of promoting freedom and democracy among our people, benefiting many of our youth in St. Kitts and Nevis through scholarships. This thirty-two years have brought tremendous benefits to our people.”

The minister added that to assist farmers in the Federation, the Taiwanese have introduced a method of testing for pesticides in the soil. This is to make certain that the foods that are grown in St. Kitts and Nevis have less contamination and are a healthier alternative to imported produce.