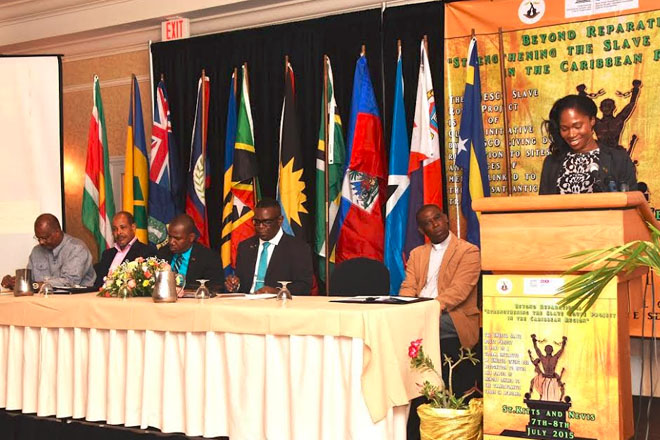 (NATCOM) Basseterre — After two days of intense discussions, presentations and networking the Regional Conference, held under the theme: “Beyond Reparations: Strengthening the Slave Route Project in the Caribbean Region”, came to a conclusion with rave reviews from all participants.

This event, an initiative of the UNESCO National Commission under the aegis of the UNESCO Scientific Slave Route Committee of St. Kitts and Nevis, which was held 7-8th July 2015, was organized with the aim of bringing together persons from across the Caribbean region who were involved with advancing the main objectives of the UNESCO Slave Route Committee: such as championing the preservation and promotion of our common heritage and sites of memory; developing scientific research and producing resource material on the trade in Africans, slavery and its consequences or finding ways and means of connecting this rich history to the economic development of countries in the Caribbean region.

Twenty-four delegates from thirteen countries in the Caribbean participated in the two-day seminar which also included fifty representatives and stakeholders from St. Kitts and Nevis who participated in four Roundtables on the topics:

Roundtable One: Background and Overview of the UNESCO Slave Route Project and its new orientation;

Roundtable Three: Strengthening the UNESCO Slave Route Project in the Caribbean: Defining the Way Forward, and,

Roundtable Four: Strengthening the Slave Route Project in the Caribbean by integrating the Reparations Issue.

In addition to the Country Reports presented by delegates, the deliberations at the seminar were also guided by incisive presentations made by a roster of distinguished experts and academicians which included, Dr. Alvin Thompson, Dr. Tara Inniss, Dr. Whitman Browne, Dr. Ahmed Reid, Sir Probyn Inniss and Professor Sir Hilary Beckles. The seminar ended with the adoption of the Basseterre Declaration (attached) which included a sixteen-point call to action and collaboration issued to “Caribbean Governments, Intergovernmental Organizations, NGOs, Academic and Cultural Institutions and Professional Associations”.

According to the Mrs. Nerys Dockery, Chairperson of the regional seminar, “The conference was immensely successful and surpassed expectations. You can’t expect to put people of such calibre, intelligence, experience and passion in one room and not expect an explosion of ideas and insight. As the organizers, we are happy to have been able to provide such an opportunity to bring together some of the key players and activists across the region on these issues in one room, and we were all able to benefit from the rich dialogue that ensued. I believe participants left feeling reinvigorated and re-vitalized to continue the important work as relates to educating our people on the issues of the trade in African captives, slavery and reparations. It is our hope that the recommendations set out in the Basseterre Declaration will be taken on board by policy makers and serve as a guide for other groups that contribute to the advancement of our cause. I am very pleased that this conference and the Symposium on Reparations have spurred a national conversation on these issues and I know that the National Slave Route Committee will continue to build on the momentum started with this conference”.