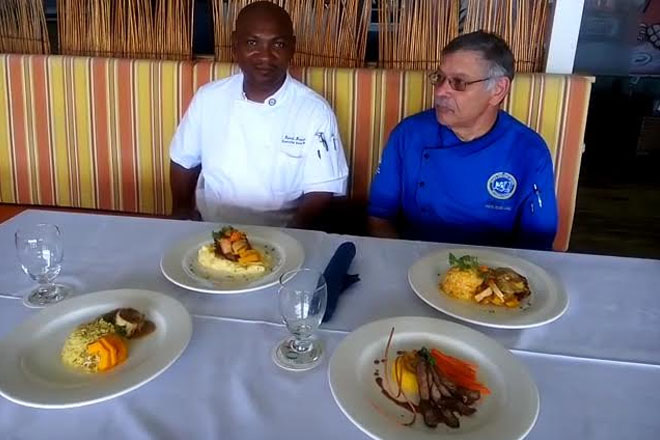 (ZIZ News) — Four contestants competed in the first ever Iron Chef Competition at The Fisherman’s Wharf earlier this week.

The chefs were divided into two teams and were asked to select ingredients from a mystery basket which consisted of various meats to use for the main course.

The participating chefs were then given one hour to prepare 4 dishes.

At the end of it all Team 2’s Laudine Liburd and Kertley Librd emerged as The 2016 Iron Chef Champions.

Celebrity Chef Jeffrey Rotz, said he was quite pleased with the outcome of the competition.

“Well I thought it was very good for a first try. The four contestants they were all eager to learn and ready to go. They did a great job and kept the kitchen pretty clean which is one of my biggest things. I’m concerned about food safety, sanitation and hygiene. The food products overall came out very good and we do have a lot more to work on because we want to bring the Fisherman’s Wharf and Ocean Terrace Inn to be the biggest, greatest hotel and restaurants on the island”, Rotz stated.

Executive Chef at Fisherman’s Wharf, David Browne said he looks forward to having more cooking competitions across the island.

“The guys prepared some lovely dishes as you can see. It was a lot of hard work for them. Moving forward we will have a lot more of these competitions, not only at OTI and Fisherman’s Wharf but across St. Kitts”, the Executive Chef added.

Chairman and CEO of TDC Group of Companies, Earle Kelly and Executive Chef At The Fisherman’s Wharf, David Browne were the tasting judges while Celebrity Chef Jeff and Terrance Dasent were the kitchen judges.