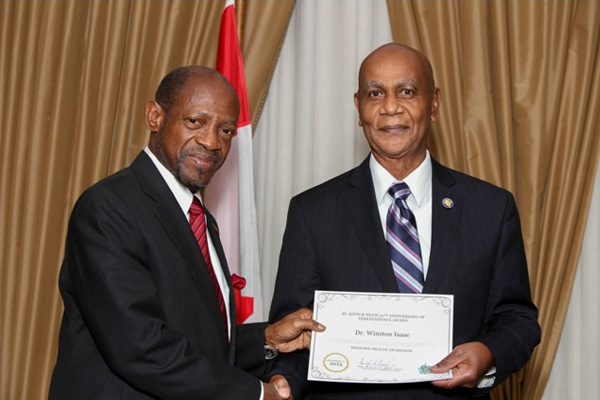 Five nationals in Canada presented with awards for services

Basseterre, St. Kitts (CUOPM) – Kittitians and Nevisians living in Canada were honoured for their contribution to humanity, health services, culture, entrepreneurship and the community.

The awards from the organisers were presented to the recipients by St. Kitts and Nevis’ Prime Minister the Right Hon. Dr. Denzil L. Douglas at Official Celebrations to mark the 30th Anniversary of the Independence of the Federation of St. Kitts and Nevis.

Currently, he holds the rank of Associate Professor in the School of Health Services Management at Ryerson University in Toronto, and recently completed the maximum term as Director of the School from 2003 to 2013.

His academic positions have included part-time and full-time instructor at several colleges and universities; Program Director at the Michener Institute for Applied Health Sciences; Program Coordinator with the Chang School at Ryerson University and Director for the School of Health Services Management at Ryerson.

He is also a Certified Health Executive with the Canadian College of Health Leaders. He holds a Diploma in Respiratory Technology from the Michener Institute and in 2007, he was made an Alumnus of Distinction in recognition of being an outstanding graduate who has excelled in his career and demonstrated commitment to his community and the roles played in the Canadian Health Care System.

In 2010, Dr. Isaac was appointed to the Board of Directors of the Central West Local Health Integration Network (CW LHIN) in Brampton. He is also a reviewer for accrediting health administration programs across North America for the Association of University Programs in Health Administration.

Dr. Isaac is a co-founder of The Walnut Foundation, a Men’s Health Interest and Support group dedicated to development and education of Black men and the wider community in taking responsibility for their health. The Foundation was established in 2007, incorporated in 2010 and gained charitable organization status in 2012.

Dr. Isaac is a sought-after speaker in Prostate Cancer Awareness and Men Taking Responsibility for their health. He is very skilled in making healthcare information understandable to the general public.

Mr. Liburd is a Pan-African entrepreneur, a community builder, a listener, a thinker and a visionary. As a valued member of the Knowledge Bookstore family, he is committed to providing the tools to promote racial and cultural pride and is dedicated to learning, sharing and teaching the true history of Africans worldwide. Sean believes that a book isn’t just a book – it is a gift of power.

He believes that books pull you up when you are down, give you hope when there is none, allow you to rejoice in happiness and open your eyes to the nobility of your fellow man.

In the same way, Sean believes that Knowledge Bookstore isn’t just a store that sells books. Through knowledge bookstore Sean has been able to provide $10,000 worth of scholarships to high school students going on to College/University in partnership with African Image Makers and raised over $20, 000 for Cite Soleil School in Haiti in partnership with Sankofaincipher.

Sean has learned that books educate and inform – but they also make you laugh, wonder and carry you to worlds you’ve never heard of inhabited by people you’ve never seen – a kaleidoscope of cultures painted on the pages in words, in pictures and in dreams. In short, books “Awaken the Mind” which is both the bookstore’s slogan and Mr. Liburd’s goal.

The Humanitarian Service Award went to Mr. Asquith Williams, who was born and raised in Basseterre, St. Kitts and Nevis.

After completing the majority of his studies at Basseterre Senior High school, he immigrated with his family to Toronto where he completed his studies at Overlea Secondary School and went on to receive a Bachelor Science degree from the University of Western Ontario in biochemistry.

Presently, Mr. Williams is the Vice President and General Manager of Charlotte Products Limited which was founded in 1986 and manufacturers a broad range of cleaning chemical products for the consumer and institutional markets.

Mr. Williams has dedicated his time, knowledge and resources to various communities in Canada and the Caribbean ensuring that they have the supplies necessary to their well-being.

Over the past five years he has been a strong annual supporter of the St. Kitts-Nevis Circle of Care, donating to both its annual fundraiser in Canada, and providing essential supplies to the elderly at home.

Mr. Williams firmly believes that besides his love of chemistry, it is his strong upbringing that enables him to thrive passionately in his chosen career. He believes that it takes a village to raise a child and humbly states that, “We can all do well and prosper, if we all look after each other.”

The Entrepreneurship Award was given to Mr. Kenneth E. Liburd also known as Junior, who was born in Nevis on September 2nd 1982. He immigrated to Canada in 1983 with his mother Mrs Joyce Liburd. After graduating from Secondary School he started his career in transportation, working with his father Kenneth Liburd Sr. at Total Sales Inc. On October 28th 2008 he founded his company, CJA Services Inc., named in honour of his children Camille, Jayden and Asia.

However with the addition of new clients and major long-term contracts, the company now owns 3 trucks, and 2 cargo vans with an asset value of $250,000. Additionally the company currently employs 5 Driver/Operators and their assistants, 2 full-time office assistants and 1 part-time driver. CJA Services Inc. was founded on the business principle of offering excellent service to its clients and their customers. Mr. Liburd and his team attribute their success to excellent work ethics, understanding our clients’ needs and providing outstanding and reliable client service.

Receiving the Entertainment/Community Award was Mr. Theodore Watts, affectionately known “Ted or Uncle T,” who has been involved in the preservation of Caribbean folk music for over four decades entertaining audiences on the Steel Pan.

He has performed at the Brampton Santa Claus parade, the Flower Town parade, charitable events, weddings, group functions, anniversaries and numerous Steel Pan competitions. As a member of the Rebels Steel Orchestra of Nevis, he performed at Expo 1967 in Montreal.

Mr. Watts, who is a Nevisian, was also a member of the “Outlaws”, and the “Golden Harp All Stars” steel band that competes in the Toronto Caribana “Pan Alive” competition. Mr. Watts has also tutored older adults, young adults and children as young as six years old in the art of Steel Pan music as he worked with the United Achievers of Brampton.

Mr. Watts love of the steel pan and his willingness to teach others how to play has played a vital role in preserving the Caribbean cultural rhythms. After deciding to take a decade long hiatus, Mr. Watts returned to the Pan which has been reattached to him ever since. On the Steel Pan, Theodore is right at home.