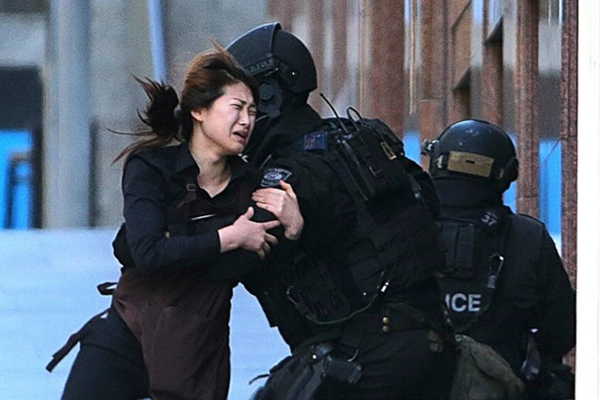 SYDNEY (AP) — Five people escaped from a Sydney cafe where a gunman took an unknown number of hostages during Monday morning rush hour. Two people inside the cafe earlier held up a flag with an Islamic declaration of faith that has often been used by extremists, raising fears that a terrorist incident was playing out in the heart of Australia’s biggest city.

The first three people ran out of the Lindt Chocolat Cafe in downtown Sydney six hours into the hostage crisis, and two women sprinted from a fire exit into the arms of waiting police shortly afterward. Both women were wearing aprons with the Lindt chocolate logo, indicating they were cafe employees.

As the siege entered its 12th hour Monday night, basic questions remained unanswered. Police refused to say how many hostages were inside the cafe, what they believed the gunman’s motives might be, whether he had made any demands or whether the hostages who fled the cafe escaped or were released.

“I would like to give you as much as I can but right now that is as much as I can,” New South Wales state police Commissioner Andrew Scipione said. “First and foremost, we have to make sure we do nothing that could in any way jeopardize those still in the building.”

Police were negotiating with the gunman and said they had no information to suggest anyone had been hurt. Scipione said they had not confirmed whether the siege was related to terrorism.

“Our only goal tonight and for as long as this takes is to get those people that are currently caught in that building out of there safely,” he said.

Channel 10 news said it received a video in which a hostage inside the cafe had relayed the gunman’s demands. The station said police requested they not broadcast it, and Scipione separately asked all media that might be contacted by the gunman to urge him instead to talk to police.

The drama began around 9:45 am in Martin Place, a plaza in the heart of the city’s financial and shopping district that is packed with holiday shoppers this time of year. Many of those inside the cafe would have been taken hostage as they stopped in for their morning coffees.

Television video shot through the cafe’s windows showed several people with their arms in the air and hands pressed against the glass, and two people holding up a black flag with the Shahada, or Islamic declaration of faith, written on it.

The Shahada translates as “There is no god but God and Muhammad is his messenger.” It is considered the first of Islam’s five pillars of faith, and is similar to the Lord’s Prayer in Christianity. It is pervasive throughout Islamic culture, including the green flag of Saudi Arabia. Jihadis have used the Shahada in their own black flag.