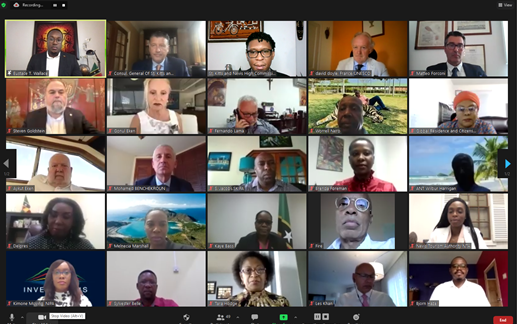 Basseterre, St. Kitts and Nevis (Ministry of Foreign Affairs and Aviation) 8th July 2021– In a Virtual Conversation on 8th July 2021, the Foreign Ministry assembled the Federation’s Honorary Consuls, Ministry staff, overseas mission and public service stakeholders to discuss how the diplomatic and consular network could support the Federation’s recovery. As the Federation continues to fight its way out of the public health crisis caused by the pandemic, and its accompanying economic malaise the Foreign Minister Brantley pointed to the peculiar vulnerabilities of Small Island Developing States (SIDS) like St. Kitts and Nevis which are expected to linger at the back end of the global recovery due to its inability to access concessional lending and Official Development Assistance (ODA.) The Foreign Minister also reminded those on the virtual call of the need to guard against complacency as we enter an above-average hurricane season which could yet severely impact St. Kitts and Nevis’ recovery. It is this reality that led Minister Brantley to call again for the International Financial Institutions (IFIs) to implement a universal vulnerability index.

To minimize this impact Minister Brantley urged the Federation’s Honorary Consuls to help diversify partnerships including with institutional investors, foundations, hedge funds, and business associations. In this context, the Virtual Conversation benefitted from senior official briefings by outward-facing agencies and ministries including the Ministry of Health, the Ministry of Sustainable Development, the St. Kitts Investment Promotion Agency (SKIPA), Nevis Investment Promotion Agency (NIPA), the St. Kitts Tourism Authority (SKTA) and the Nevis Tourism Authority (NTA). The Citizenship by Investment Unit also was available to update the consular corps. The presentations by these key ministries and agencies allowed the Federation’s sectoral priorities and strategies to be communicated to a key group.

To underscore the central role of honorary consuls in the Ministry’s arsenal the Foreign Minister noted that, “As Honorary Consuls you are ideally placed in global, high impact cities that drive trade, finance, scholarship, culture, travel and investments. In this area of downturn, I charge you to double down on your roles as Honorary Consuls.” He also seized the opportunity to thank the Honorary Consuls for their service in assisting Kittitians and Nevisians who may have been stranded while traveling internationally during the pandemic.

In closing out the rich discussion which involved Honorary Consuls from as a far as Casablanca to Florence to Geneva to Philadelphia, the Permanent Secretary invited colleagues to use the forum to increase information sharing, boost communication and work more strategically and cohesively to secure St. Kitts and Nevis’s vital economic and developmental interests.

Honorary Consuls expressed appreciation for the dialogue and used the opportunity to share ideas for forging deeper links, exploring greater cooperation and enhancing communication between all stakeholders.